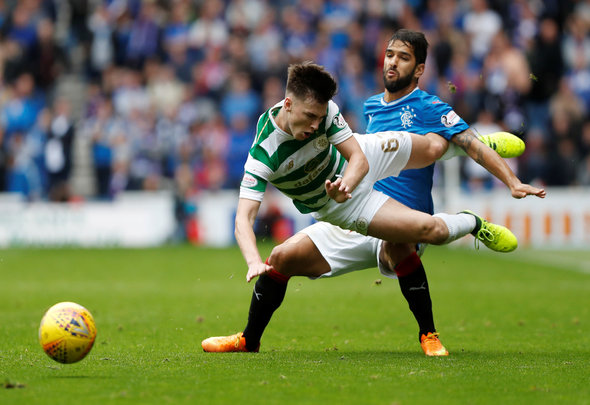 The international break is absolute torture for many football fans, not least because they just want to see their club side back in action – and it seems as though the Celtic fans are already getting riled up as a result. The Scottish Sun have reported that Hoops star Kieran Tierney has not only pulled out of Scotland duty with injury but is now a major doubt for their derby day showdown against Rangers in the first game back after the two week hiatus. There are few players that the Parkhead faithful would less want to lose from such a crucial tie and as one fan points out, his absence back in December was a big part of why the Gers were able to snatch the bragging rights away from their Glasgow rivals. It remains to be seen whether this was an injury picked up while away with Scotland or something that he already had but he surely should not have travelled with the squad if he was not 100 per cent fit. If he misses out against Rangers then there will be plenty more angry fans jumping on the back of the Scottish FA.

Football Insider has gathered some of the best responses below:

Tierney never looked fit against Dundee tbh. Be surprised if he’s fit for next week.

Most worrying thing is if tierney can’t play , that was a huge portion of the reason we lost last game

@kierantierney1 should never have been involved in this squad! He cld barely move during the last 10-15 mins of Dundee game at the weekend.

Kieran Tierney making that trip was an absolute waste of time. He better be ok for next weekend

Not apportioning any blame here because I don't know what happened, but Kieran Tierney being sent round the world across six timezones only for him to be sent home again a few days later is baffling. Seemed clear he was not fit on Sunday.

Just why in hell was he taken there?