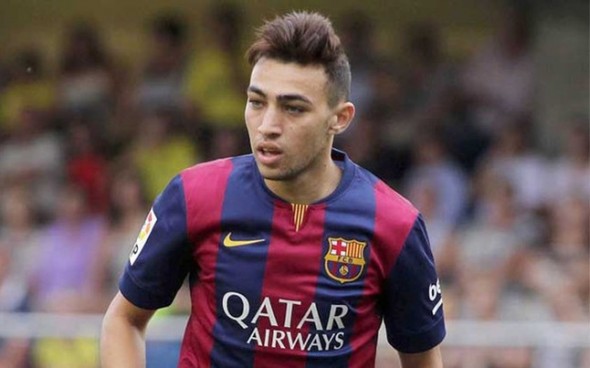 Tottenham are interested in bringing Barcelona’s emerging talent Munir El Haddadi to White Hart Lane, according to a report.

Spanish publication Sport report that Tottenham are one of three Premier League clubs keeping tabs on the 20-year-old, with Everton and Stoke also keen on his services.

Goal.com have already revealed that Munir may well leave the club before the end of the transfer window, as he considers his options. The winger is valued at £13million by the current La Liga holders.

Barcelona would consider letting the young forward go if a buy-back clause is in the deal. Sport claims that Spurs want a deal without the return clause.

Munir has 45 Barcelona first team appearances to his name and has netted ten goals. Most of these appearances have been off the bench though, and he is behind Lionel Messi, Luis Suarez, Neymar and Arda Turan in an elite pecking order.

Munir, who also has one cap for Spain, made a fleeting appearance for Barcelona on Saturday in their return to La Liga action, coming off the bench for 20 minutes in a 6-2 thumping of Real Betis.

He wants to stay and prove himself at Barcelona but could consider a move if the Spanish giants sign another striker in this window.

“Barcelona told us their intention was to sign a new striker,” his agent Francesc Valdivieso said to Goal.com. “Munir has to understand that it could compromise his sporting chances (to stay) and stack things against him.”

In other Spurs transfer news, Pochettino is set to turn to 19-in-33 goal winger in hopes of bolstering attack.