Aston Villa manager Steve Bruce has revealed that Henri Lansbury joined Christopher Samba in picking up a muscle injury in the 0-0 draw with Millwall on Saturday.

The Villans were frustrated by the Lions at Villa Park, with goal scoring opportunities at a premium for both sides.

In the end the points were shared, thanks to an impressive display between the sticks from Villa’s Sam Johnstone.

However their failure to win was not the only disappointing thing for Bruce, having seen Samba replaced by Tommy Elphick with what appeared to be a hamstring injury just 12 minutes from the full time whistle.

The former Hull boss also revealed the surprise news that Lansbury had complained of a similar concern after the game, having played the full 90 minutes, which potentially hands Villa a double blow ahead of next week’s clash against Derby next weekend, the Rams having leapfrogged Bruce and his men with a win over Barnsley.

Bruce was quoted by the Birmingham Mail as saying: “I’m not so sure whether it’s a calf or a hamstring (for Samba) – it looked like a hamstring.

“Lansbury has got one as well. So that’s a disappointment as well.

“I don’t want to use excuses because we’ve had it (injuries piling up) now for months but we certainly don’t need any more.

“It opens the door. We’ll see how everybody is. We’ve got a week now to prepare for Derby.”

The result leaves Aston Villa sitting in fifth, level with sixth placed Sheffield United and now just four points off seventh placed Leeds United, who are fighting for a play off spot come the end of the season.

In other Aston Villa news, a senior Villa player hits out at Chairman after a shock interview. 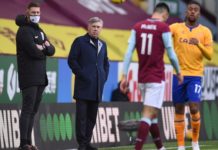