Steve Thompson has predicted Rangers to beat Ross County on Sunday afternoon with a tight 2-1 victory.

Mark Warburton’s side will travel to McDiarmid Park on Sunday, where they will face a club who are currently second from bottom with just one point separating them from 12th placed Dundee.

Meanwhile Rangers are second in the league, although they face a much bigger nine-point gap from fierce rivals Celtic, whoa re perched above them.

Thomspon, who played for Rangers and Scotland during his football career, predicted a win for his former club, highlighting their opponents recent poor form.

Rangers last met Ross County in 2002 in the League Cup, which saw the Ibrox side win 2-1.

The Gers will be keen to continue their good form in the Premiership after winning promotion back to the top flight in the summer.

However, Ross County will put up a stern fight as they look to fight off relegation and they will also have the backing from the home support.

In other Rangers news, Joe Garner has identified the trio who can replace Niko Kranjcar. 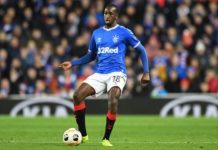 Hutton: Kamara would be an ‘absolute steal’ even at ‘massive’ new Rangers price tag