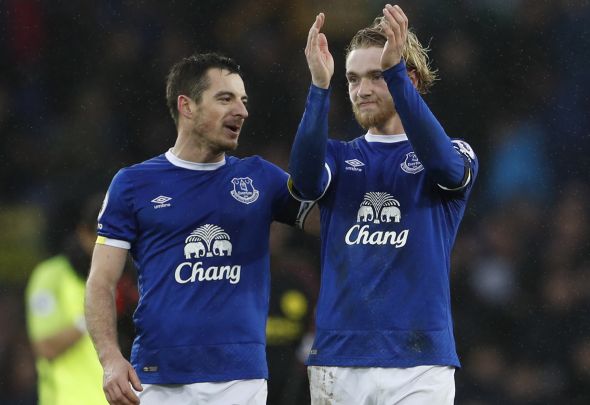 Ex-United and England midfielder Robson is regarded as one of the all-time greats at Old Trafford after a hugely successful spell with the club.

He made 461 appearances for the Reds Devils and scored 99 goals in return, while also being renowned for his all-round superb play.

Walsh has made a brief comparison between Robson and Everton’s emerging star Davies.

“I see a little bit of Bryan Robson in him,” Walsh told the Nissan Super Sunday programme on Sky Sports One. “Hopefully he will develop into a full blown international.”

Davies has made a huge breakthrough at Goodison Park this season in the first team after graduating from the academy.

The 18-year-old has established himself as an important player under Ronald Koeman and looked comfortable in the centre of midfield.

He completed 90 minutes on Sunday as Everton defeated reigning champions Leicester 4-2 at home.

Davies scored his second goal of the season in just the 1st minute against the Foxes after cooly taking the ball around the goalkeeper and finishing.

The box-to-box midfielder netted his first goal in a dramatic fashion too, after a mazy run he cooly scored in a 4-0 victory over Manchester City.

In other Everton news, Koeman delivered his verdict on the club’s January signing.

We’ve launched a << BREAKING NEWS FEED>> exclusively for your club. ‘Like Us’ on Facebook by clicking here if you want 24/7 updates on all Everton breaking news.,