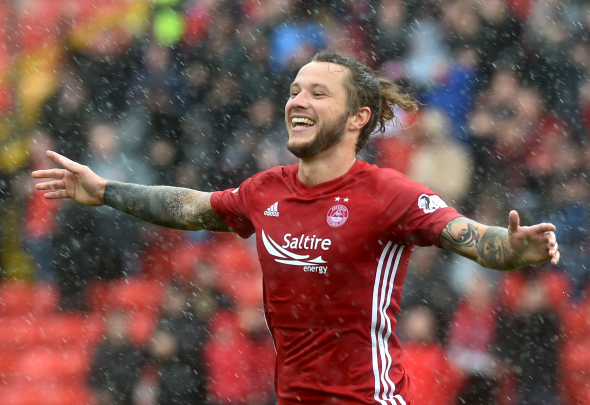 Aberdeen star Stevie May insists that his team-mates have to “get on with it” after manager Derek McInnes was again made favourite by bookmakers to replace Pedro Caixinha at Ibrox.

SkyBet have Aberdeen manager McInnes priced as favourite to succeed Caixinha after replacing Alex McLeish as frontrunner for the job.

The Aberdeen boss takes his side to Ibrox on Wednesday for the first of two clashes between the side this week and striker May insists the Dons squad just have to ignore the speculation surrounding McInnes’ future.

“I don’t think any of the boys really take any notice of it,” May said, as quoted by The Scotsman.

“Throughout your career, you’re always going to have speculation surrounding players and managers so you just have to get on with it and deal with it.”

McInnes has been a huge success at Pittodrie since replacing Craig Brown – taking the Dons to three successive second-place finishes in the Scottish Premiership and winning the Scottish League Cup.

The 46-year-old spent five years at Ibrox as a player after signing from Greenock Morton in 1995.

After meeting on Wednesday night, the two sides will clash again on Sunday at Pittodrie as Rangers look to close the six-point gap on the Dons.

Interim Rangers boss Graeme Murty has lost his last two games in charge of the Light Blues after being handed temporary control in the wake of Pedro Caixinha’s sacking on October 26th.

Murty won his first two games but has since lost to Hamilton and Dundee as the Ibrox board take their time to recruit Caixinha’s successor.

In other Rangers news, a new favourite has emerged for the managers job at Ibrox.