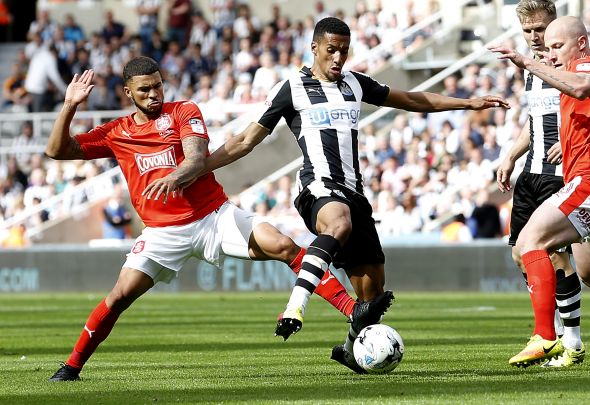 Huddersfield striker Nahki Wells has denied any deal is in place with Leeds after he started following them on Twitter.

The 24-year-old Bermudian began following the Yorkshire club’s official Twitter account on Tuesday, which sparked speculation that he might be making a big-money move to Elland Road.

However, the former Bradford star then posted on his Twitter account saying it had been a mistake and that he had never meant to follow Leeds.

The initial follow on Twitter may understandably have caused panic among Huddersfield fans, as the striker has been linked with a move this summer.

Bermuda international Wells has been at Huddersfield since joining from Bradford in 2013 and has been a big success, scoring 40 goals in 110 matches in all competitions.

The Yorkshire Evening Post claimed in August that Newcastle were interested and would have to pay £8million for the 26-year-old would.

He has also been linked with a move to Aston Villa, after their owner Tony Xia claimed on last Sunday that they were working on a deal for a “world-class striker”.

We're working very hard 2have a world class 9#striker. Very close to the new full back. Hope both will happen next week! Enjoy weekend!#UTV

However, after a long silence they have completed the signing of Jonathan Kodjia on a four-year deal.

Villa announced the signing of the 26-year-old forward from Bristol City on their website on Tuesday afternoon.

In other Leeds transfer news, they submit bid a for an ex-West Ham midfielder and are issued a response.