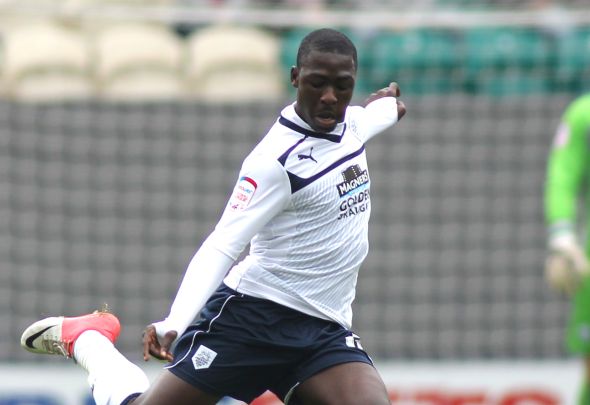 The League Two side announced via their Twitter and website that Monakana, 22, would be joining the side subject to international clearance.

The club is set to sign striker Jeffrey Monakana but not yet…full details here:https://t.co/ggqXEDBa8d #ctfc pic.twitter.com/aoXQjIdlKi

Gloucestershire Echo sports editor Jon Palmer then revealed on his personal Twitter account that an unnamed former Arsenal team-mate described him as “the funniest man I have ever played with and bags of talent”.

The right-footed winger will join from Romanian club FC Vountari, just six months after joining them.

He played three times towards the end of the season as Voluntari narrowly avoided relegation from the top Romanian division.

Monakana came through the Arsenal youth system but failed to earn a contract and subsequently joined Preston.

He was an important part of their team in the 2012-13 season and played 47 times scoring six goals, before being loaned out to Colchester at the beginning of the following season.

After that loan spell he joined Brighton, in January 2014, but struggled to fit in and was sent out on loan to Crawley, Aberdeen, Mansfield, Carlisle and Bristol Rovers over a period of two years.

Across nine senior teams the 22-year-old has played 95 times, and will be hoping for a more stable spell at League Two Cheltenham.

The Gloucestershire side were promoted from the National League last season, just one season after being relegated from the Football League and are now managed by experienced manager Gary Johnson.

In other Arsenal transfer news, they battle with London rivals for Argentine starlet dubbed the new Dybala.