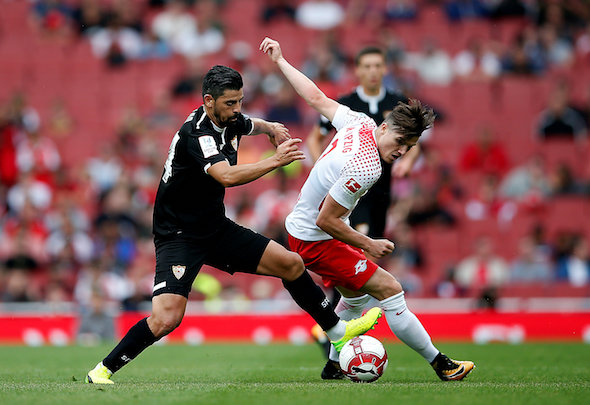 Sevilla summer signing Nolito will miss the opening Champions League match against Liverpool on Wednesday night, according to a report.

Spanish publication Diario de Sevilla has revealed that the 30-year-old failed to pass a late fitness test on Monday due to a hamstring injury.

The newspaper reports that the forward will not travel with the rest of his teammates to England ahead of the clash at Anfield.

The Spaniard signed a three-year deal with the La Liga side this summer after failing to live up to the expectations in the Premier League with Manchester City last season.

Nolito has enjoyed a fine start to life back in his native country, contributing with one goal and two assists in all competitions so far.

The forward’s performances have helped the Andalusians remain unbeaten in the La Liga where they currently sit in third position ahead of current champions Real Madrid.

Both sides have never faced each other in the Champions League but Sevilla did come out on top in their last competitive meeting in the 2016 Europa League final, picking up a 3-1 victory.

The Reds have not competed in the elite European club competition since the 2014-15 campaign where they failed to progress through the group stages.

In other Liverpool news, a BBC pundit has predicted one of two players will be axe to make way for new signing Alex Oxlade-Chamberlain.