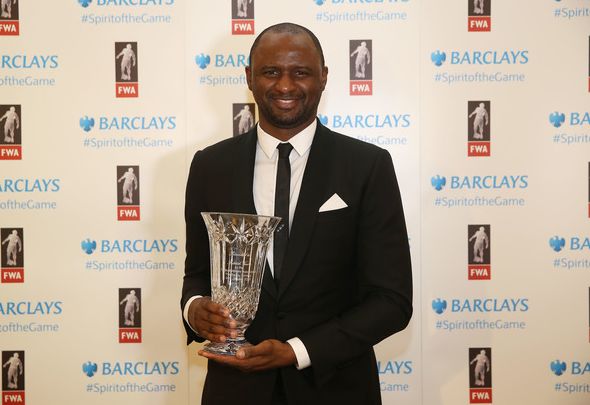 Sunderland have lined up former Arsenal midfielder Patrick Vieira as a replacement for manager David Moyes, according to a report.

Moyes arrived at the Stadium of Light at the start of the season faced with a gruelling battle against Premier League relegation, but saw his side slip to the bottom of the table with defeat to West Brom on Saturday.

The Black Cats are in no mood to part ways with the experienced boss at this stage, but have lined up a contingency plan should the Scot fail to improve results, or quit by his own hand.

The Sun reports that Patrick Vieira is at the top of Sunderland’s shortlist, with the French coach currently in charge of MLS outfit New York City.

Vieira could be considered a shock appointment by the Black Cats, given his relative lack of managerial experience.

He was previously on the books at Manchester City as a reserve coach, and has been tipped to become a future manager at the Etihad. Sunderland could be seen as a good stepping stone towards that ultimate goal.

Vieira has ambitions of trying his hand at management in the Premier League, having led New York City to the semi-finals of the MLS Eastern Conference last season.

The 40-year-old won three Premier League titles during almost a decade-long career with Arsenal, becoming club captain for his final three years at the club, where he is seen as a true club legend.

He made a total of 406 appearances for the Gunners in all competitions, scoring 34 goals.

The reality is at the moment that any manager looking to take the helm at Sunderland is in for a rough ride. Sam Allardyce did an excellent job rescuing them from relegation last season, and David Moyes must perform a similar miracle this term. However, with just four wins from 22 games this season, Sunderland are understandably drawing up a backup plan. Patrick Vieira is a surprise choice, but one that could have the desired impact. He has a wealth of Premier League experience from his playing days with Arsenal, but demonstrated superb leadership whilst in north London, and that would be a major lift to a Sunderland side that look devoid of all confidence. There is little else to judge Vieira on, considering he has not spent that much time as manager of a club, having only joined New York City a year ago.

In other Arsenal news, Gunners fans gave mixed reviews on Twitter as Per Mertesacker signs a new one-year deal.