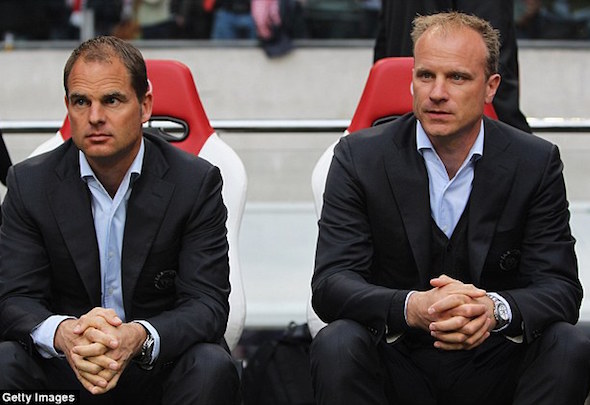 By Editor Wayne Veysey | Former Evening Standard, Press Association and Goal chief correspondent with 17 years experience of breaking big stories, including exclusives like this
Follow me on Twitter @footyinsider247
Dennis Bergkamp has emerged as an early frontrunner to replace Garry Monk at Swansea, Football Insider sources understand.
The Arsenal and Holland legend has been Frank de Boer’s No2 at Ajax for the last four years but is now ready to take his first steps into management.
A Swansea source has told Football Insider that Bergkamp is being considered as a possible replacement for Garry Monk, who will be sacked this week.
Ex-manager Brendan Rodgers is also a frontrunner, while Rangers boss Mark Warburton is a less likely possibility.
The decision was made to dismiss Monk after Saturday’s 3-0 defeat to Leicester. His job has been hanging by a thread for the last month and senior officials have now decided to end his 18-month reign.
Former playmaker Bergkamp, 46, has been learning the coaching trade since ending one of the great Premier League careers in 2006 following a memorable decade at Arsenal.
Swansea want to recruit a head coach rather than a traditional manager and believes the Dutchman fits the profile they are looking for.
David Moyes has been linked with the post at the Liberty Stadium but a source close to the former Manchester United and Everton manager has told Football Insider that he is not in the running.
Moyes, who was sacked by Real Sociedad last month, would prefer to bide his time and wait for another Premier League job to become available.
Rodgers is still highly regarded by the Swansea hierarchy but it remains to be seen whether he would want to return to the club that he managed for two years before taking charge at Liverpool.
Swansea are ready to wield the axe just seven months after Monk guided the club to highest-ever Premier League finish of eighth.


Swansea have not won since beating Manchester United on 31 August and, although they lie in 15th in the table, they are only one point above the drop zone and chairman Huw Jenkins want to act before a crisis can develop.
Jenkins and publicity-shy fellow director Michael Morgan, the club’s largest shareholder, have always pre-empted trouble by acting swiftly before a crisis can develop and believe the team’s wretched run offers Swansea an ideal opportunity to replace Monk.
Monk is not only highly regarded for his 18 months in the dugout but the former defender joined the club in June 2004 when they were in League Two and has been integral in helping to establish them as a top-flight club.