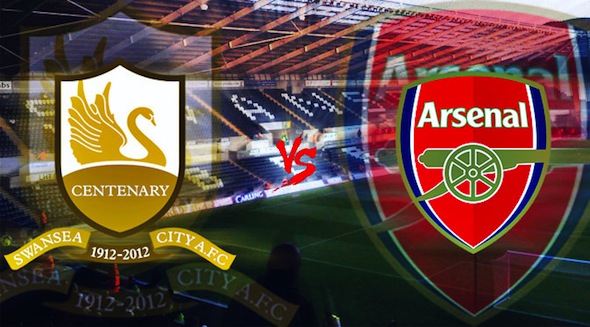 Luke Moore turns his attention to the Liberty Stadium as Arsenal come to town…
Thinking of having a bet on this game? For an awesome cash bonus and a free bet on Swansea or Arsenal just CLICK HERE for Football Insider’s new free bets service
Swansea v Arsenal
Saturday, 15:00
Swansea
It’s been a difficult few weeks for Garry Monk and his team, as a poor run of results was also compounded by rumours about his position after he was alleged to have not attended training one day last week. That was later proven to be wide of the mark, and a win against a shambolic Aston Villa was salve to their wounds, but they now face a proper test in the shape of Arsenal.
Monk and his charges can take solace from the last meeting between the sides – the Swans came away from the Emirates with all three points after a narrow 0-1 win, but the manager must know that this is in no way an easy game. They’ll need to be back up at the level they were at when beating Manchester United in August.
Monk has a full strength side to choose from.
Arsenal
The last week and half has been so typically Arsenal. The Gunners beat Bayern Munich in the Champions League, who are probably the best team in Europe, and then followed that up with a defeat of a useful Everton side. Then, lo and behold, a truly woeful performance against Championship side Sheffield Wednesday in the Capital One Cup meant they lost 3-0, picked up a couple of key injuries and were dumped out of a competition that Arsene Wenger is yet to win as a manager.
All that aside, they are still genuine title contenders, but they’ll need to show that against Swansea on Saturday. A problem area looks to be on the right hand side of midfield, and Wenger will need to shuffle the pack with no less than seven first team midfield players currently injured or unavailable.
Match Odds
Swansea are fairly generously priced (5.20) for this encounter, given that they won their last game, have a record of being able to at least compete with Arsenal and in fact have the superior record in this fixture, and also face them on their own patch. 5.20 interests me.
Arsenal at 1.77 is simply too short, for the reasons I’ve stated above and also because of their injury woes. I can’t advise a back of them at that price.
The Draw is currently available at 4.00.
Over/Under 2.5 Goals
I’ve selected Under 2.5 Goals at 2.16 as my Battle Bet this week, and you can read why here. Despite the two teams playing the ball on the deck a lot traditionally, I don’t see this game being a classic or a ‘you have a go, we’ll have a go’ type affair at all. I was surprised to see unders trade so high, given that the last meeting between the two teams didn’t come close to going overs.
Double Chance
If you don’t fancy backing Swansea for the win, a bet that will offer you more insurance is backing Home or Draw in the Double Chance market at 2.26. You’re getting the draw onside too of course, and that provides extra protection and still gives you a chunky enough odds-against price.
Recommended Bet
Back Swansea at 5.20
Thinking of having a bet on this game? For an awesome cash bonus and a free bet on Swansea or Arsenal just CLICK HERE for Football Insider’s new free bets service