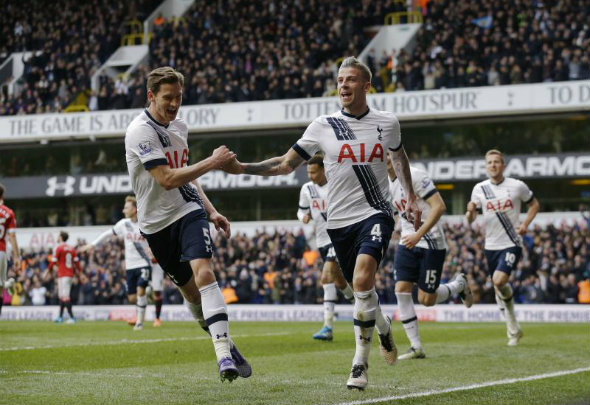 TalkSPORT have ranked Tottenham defender Toby Alderweireld as the best centre-back in the Premier League.

The popular radio station has listed 20 defenders, who are considered the first choice at their respective clubs in order of ability.

The Spurs centre-back has been out injured for over a month now following a collision with team-mate Jan Vertonghen during the 1-1 draw with West Brom.

However, his class has not been forgotten and talkSPORT elected him their best centre-back in England’s top flight.

“Alderweireld is only into his second season at White Hart Lane, but took no time at all to establish his position as one of Mauricio Pochettino’s most important players,” wrote the station on their website. “His leadership and ability has helped to cement Spurs as a serious top four contender. It’s no coincidence their status in the top flight has soared since his arrival. He’s been a huge miss over the last six weeks.”

Alderweireld has been a key member of a very impressive Spurs defence since arriving from La Liga side Atletico Madrid in 2015.

He has featured in 59 encounters for the north London outfit and has formed a near impenetrable partnership with club and country team-mate Vertonghen.

Mauricio Pochettino’s side still boast the best defensive record in the Premier League with eight goals conceded in 12 fixtures.

However, they will be keen for Alderweireld to return with a title charge on the agenda.