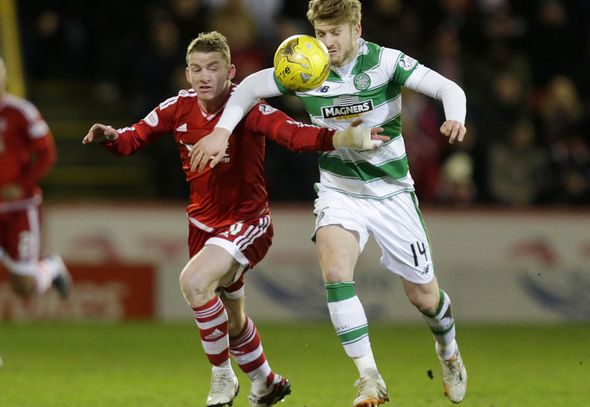 Tam McManus has questioned where Jonny Hayes would fit into Celtic’s side as Brendan Rodgers reportedly closes in on the Aberdeen attacker’s signature.

The Daily Mail claim that Celtic are set to complete a £1.2million deal for the 29-year-old, and are keen to rubber stamp a move before Hayes joins the Republic of Ireland squad on Sunday.

Replying to a Celtic fan on his personal Twitter account, former Scottish Premiership striker McManus claimed Hayes would prove to be a “handy squad player.”

McManus, who played for Hibernian, Dundee and Dunfermline among others, claimed a move for Hayes would see Gary Mackay-Steven and Ryan Christie leave Parkhead.

Hayes has been in phenomenal form for Aberdeen this season, scoring 11 goals turning provider on a huge 24 assists during his 44 league and cup appearances.

Sky Sports claim Christie could be a part of the deal that sees Hayes and Rodgers combine for a second time after working together at Reading.

Christie has been on loan at Aberdeen during the 2016-17 season and could now complete a permanent move to the Dons in order to sweeten a deal for Hayes.

The Daily Record claim newly-promoted Sheffield United are also said to been on signing Mackay-Steven, with his future in doubt after making just 11 appearances this term.

Hayes would become Celtic’s first summer signing as Rodgers looks to bring in the right additions to help his side complete a second successive treble and go one better in the Champions League.

In other Celtic news, Scott Sinclair has revealed he cannot understand this decision made by Rodgers.