Marcelo Bielsa signing a new contract with Leeds United was a “foregone conclusion” according to Noel Whelan.

Speaking exclusively to Football Insider assistant editor Russell Edge, the former Leeds forward and boyhood fan claimed the Argentine was too focused on preparing for the new season to sign a deal immediately.

Bielsa said in his press conference prior to Leeds’ Premier League opener with Liverpool that he had signed a new deal with the Whites before it was confirmed by the club.

This will be the 65-year-old’s third season at Elland Road making it the longest he has worked at club including his time at Newell’s Old Boys where the stadium is named after him.

Asked by Football Insider about Bielsa’s new contract, Whelan said: “This man is more concentrated on the players, the club and training than himself.

“He wants to focus on training, getting these lads very well prepared for the season in the Premier League.

“It was a foregone conclusion that he was going to sign a contract in his own time.

“There wasn’t too much to be discussed there it was just a matter of him putting pen-to-paper.

“He just wants to train, be out there on the training ground putting his philosophy out there and methods across to the player and have them well prepared.

“In his eyes that comes first, and that just shows his humility.”

In other Leeds United news, Football Insider can REVEAL the Whites are set to unveil a new signing next week with a medical currently taking place abroad. 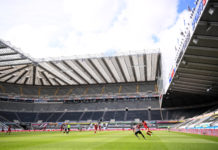