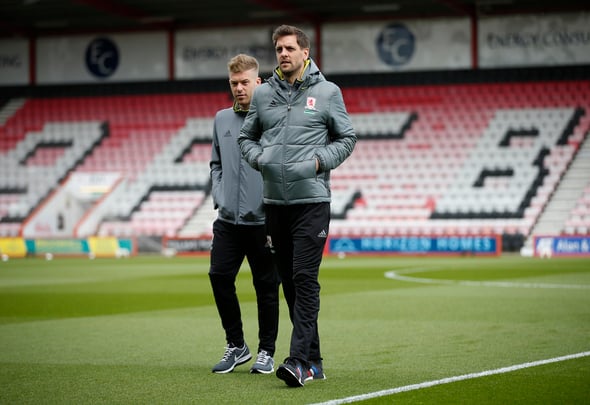 The arrival of Robbie Keane as assistant to Jonathan Woodgate at Middlesbrough should bring the best out of Britt Assombalonga and see the return of attacking football to the club, according to Noel Whelan.

The former Boro forward, speaking exclusively to Football Insider, insisted that he and the rest of the fans at the Riverside were fed up with the negative football played by Tony Pulis, suggesting that the arrival of former Spurs and Republic of Ireland ace Keane will change that next season.

Boro, who finished seventh in the Championship in Pulis’ final season, saw only two sides outside the relegation zone score less than their 49 goals in the second tier and Whelan is looking forward to seeing the Riverside bouncing again.

“The good thing about it is that he’s brought in Robbie Keane as well. I did feel it was a little bit defensive heavy within the coaching staff. I think that will bring the best out of (Britt) Assombalonga as well, with Robbie Keane there.

“If you’ve got that nice balance of attack and defence within the ranks because I do think they needed that attacking side as well. Last season, I think the fans will agree, it was very dull football to watch at the Riverside.

“Hopefully Woody can get that fine balance – that discipline you’d expect at the back but that creativity and excitement that the Boro fans are used to watching up front.”

Assombalonga, 26, scored 14 goals in 42 league appearances for the north east outfit last season, adding another two strikes to his record in his three FA Cup outings.

He only managed to score more than one goal in a game on two occasions – one a brace against West Brom and the other his two cup goals versus Peterborough.

In other Middlesbrough news, it can be REVEALED that Boro are leading the hunt to sign a winger with 15 Premier League appearances last season.