Neil Lennon said “b******* to it” and undercut Peter Lawwell’s recent apology because the two Celtic men “don’t talk.”

That is according to former Celtic star Frank McAvennie, speaking exclusively to Football Insider after a nightmare fortnight for the Hoops PR team.

Christopher Jullien tested positive for Covid-19 upon returning from Celtic’s much-maligned mid-season trip to Dubai, with 13 other players and manager Neil Lennon forced to self-isolate as a result.

Chief executive Lawwell was subsequently forced into an apology, which Lennon promptly undercut with an angry press conference outburst.

He told Football Insider: “It just shows you that the two of them don’t talk.

“It might be Lenny just saying b******* to it and just saying what he thinks. I get a manager coming out and sticking up for his team but no matter what Lenny or anyone says, they have not been good enough this season.” 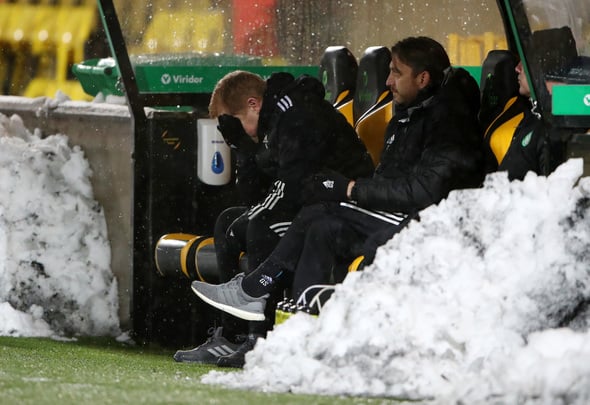 Celtic are without a win in four matches and are an astonishing 23 points behind unbeaten Rangers at the top of the Scottish Premiership.

It’s a slide that began before the Bhoys coronavirus problems, however, and on-loan forward Mohamed El Younoussi says it is time for Celtic to stop “looking for excuses.”

In other news, a Celtic transfer target has been the subject of a failed transfer bid from a English Football League club.