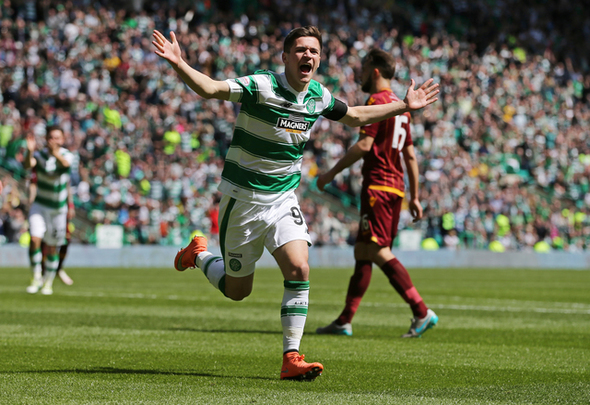 Celtic have already secured the Scottish Premiership title and are not going to be playing for a lot in their final four fixtures other than trying to remain unbeaten.

The first-teamers, and back-up players, have proved that they are a cut above their Scottish opponents this term and now would be the perfect time for Brendan Rodgers to give some of his younger talent a chance at senior league football.

Here, Football Insider takes a look at three wonderkids that must play between now and the end of the season.

The 17-year-old striker is one of the most exciting young players to come through the Celtic academy in recent years and could go on to become one of the club’s greatest players. Aitchison has already played three senior games for the Hoops and even scored on his first-team debut in the 7-0 thrashing of Motherwell last season. In the first half of the campaign, the 17-times Scotland Under-17 international scored on two separate occasions against Barcelona’s youth team in the UEFA Youth League. Moussa Dembele is likely to miss the rest of the league season and there isn’t anyone that offers a big challenge to Leigh Griffiths’ starting slot at the moment – Aitchison must be the wonderkid to do that.

If Rodgers needs to rely on a utility man to help his first-team squad, then it’s Miller. The Scotland Under-19 international made his first senior appearance in the 1-0 win against Partick in December playing at left-back in the absence of Kieran Tierney. However Miller is also adept at playing on both wings and even as a striker, despite his solitary performance in Rodgers’ defence. Although it will take a lot to keep Scott Sinclair, or even Tierney, out of the Hoops main squad – Miller would be a good player to come off the bench to earn some invaluable experience.

The 21-year-old midfielder is somewhat of a forgotten man at Parkhead, but he should still earn some first-team appearances before the season ends this month. Scott Brown is currently suspended for two games and Rodgers should take a risk by playing Henderson at least once in his absence. Unlike Miller and Aitchison, Henderson has quite a bit of senior football under his belt, having made 36 appearances for the club in all competitions, with 13 of them coming this season. However the Scotland Under-21 international hasn’t started a game since the 2-0 win over Motherwell in February, but now would be the perfect time for him to return to action.

In other Celtic news, Football Insider names three things we can expect from the Bhoys against St. Johnstone.