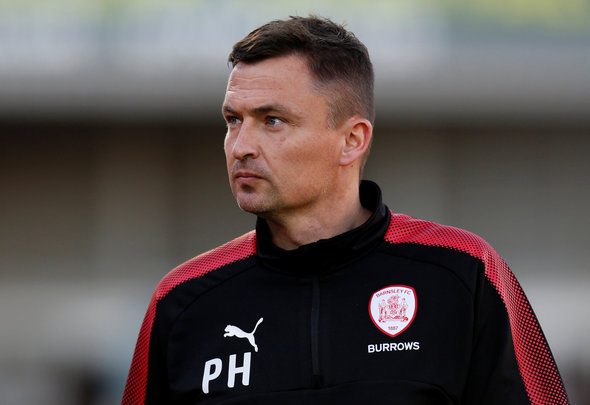 By Richard Parks
Paul Heckingbottom is set to be followed to Leeds United by three members of his backroom staff in yet another coaching overhaul at the club, according to a reliable journalist.
Radio Yorkshire correspondent Joe Rawson reported on his personal Twitter account on Tuesday morning that Heckingbottom will be imminently appointed as the new Elland Road and is “expected” to be joined at the club by two men from Barnsley and a third unknown coach.
Rawson said the Tykes’ first-team coach Jamie Clapham and goalkeeping coach John Vaughan are set to follow the 40-year-old in making the short journey across Yorkshire, followed by “one more currently unknown:.

Former left-back Clapham has previous experience of Leeds, making 13 appearances for the club in League One while on loan from Wolves in the 2007-08 season.
Leeds finished in the play-offs that season and made it to the final where they lost 1-0 to Doncaster.
Heckingbottom has a clean slate to work with at Elland Road after it emerged that the key allies of former manager Thomas Christiansen followed him out of the club.
Julio Banuelos, Paul Butler, and Ivan Torres were given their marching orders, although it has not been reported whether set-piece coach Gianni Vio is still at Leeds.
Heckingbottom is expected to be announced as the new Leeds boss later today (Tuesday).
His first game in charge will be in front of the Sky TV cameras as he takes his team to face Sheffield United at Bramall Lane on Saturday lunchtime.
In other Leeds United news, it can be revealed that Heckingbottom has emerged from a three-man shortlist.
Don’t miss out on breaking and exclusive Leeds news by clicking here for our brilliant 24/7 updates on Facebook, Instagram and YouTube.