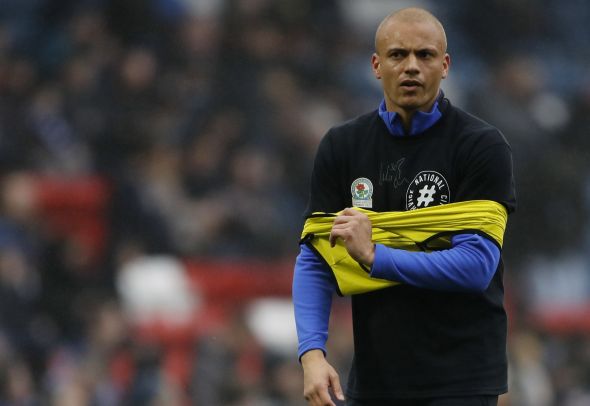 Rangers would bolster their defensive ranks with the signing of veteran defender Wes Brown after the former England international was released by Blackburn Rovers.

Clint Hill revealed he would leave the 54-time Scottish champions at the end of the season, just a year after joining the club on a free.

Available on a free

Brown has been released by Blackburn after the club released their retained list on their official website. The veteran defender joins the likes of Danny Guthrie, Jason Lowe and Gordon Greer in missing out on contract extensions at Ewood Park and will now be on the search for a new club. Missing Hill, Rangers would hugely bolster their defence with the signing of Brown, who is known for his leadership and aerial prowess at the back and would prove a like-for-like replacement for Hill. Of Rangers 14 signings this season, only two have required a transfer fee and bringing Brown to Glasgow on the cheap could be an option for Pedro Caixinha.

A seven-time Premier League champion with Manchester United, Brown knows what it is like to be in a side that are pushing towards the top of the table. His experience in a side that is looking to win every match will help inspire his Rangers teammates, should he join Caixinha’s revolution in the summer. Brown also boasts two Champions League winners’ medals and that kind of trophy cabinet and winning mentality could prove the difference in clawing in Old Firm rivals Celtic next season.

Brown could also be brought in to help the Gers’ young defender in their transition from Scottish premiership hopefuls to top defenders. David Bates, Aidan Wilson and Myles Beerman have all been used this season at the back under Caixinha, and the trio could do with an experienced head giving them advice in their young careers. Brown made 308 Premier League appearances south of the border and knows all the tricks of the trade in reaching the top. Passing on those expertise could be vital in the progression of the youngsters’ careers.

In other Rangers transfer news, the Gers should see this 21-year-old after a shocking display against Aberdeen.