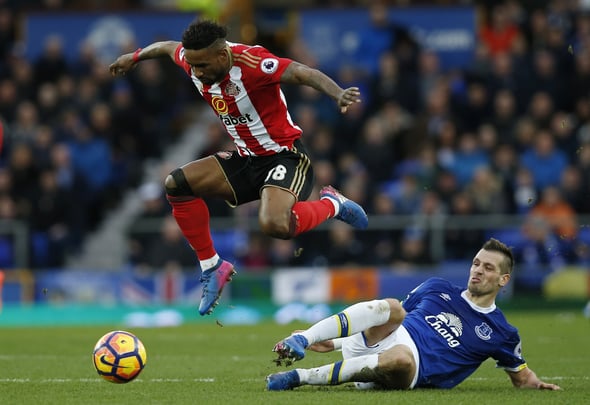 Jermain Defoe has admitted that he might have to move clubs if he is to make England’s 2018 World Cup squad – and West Ham would be the perfect fit.

This comes after he was included in Gareth Southgate’s Three Lions squad to face Germany and Lithuania, the first time the Sunderland striker has been selected since 2013.

Speaking to the Telegraph, Defoe admitted that he may have to leave Sunderland if they are relegated this season, in order to keep his England dreams alive.

“Obviously you have to be realistic and to get into any squad it is based on merit and you need to be playing at the top level,” Defoe said.

“I would say I probably need to be playing in the Premier League but we will see what happens.”

The Sun reported that West Ham had made Defoe their top target in January, a move that didn’t come off, but if Sunderland do go down it could be the perfect time to reignite their interest.

Here are three reasons why the 34-year-old would be the perfect fit for the Hammers.

It’s as simple as that. Defoe has scored goals at every club he has played at his whole career – 234 in 593 games – and West Ham need goals if they are going to challenge for the European spots.

The Hammers have scored just 40 goals after 29 games this season, leaving them with a goal difference of minus 12. Their top scoring striker is Andy Carroll who has only netted six times this campaign.

This season – at a struggling Sunderland – Defoe has bagged 14 goals in 28 league games. Imagine what he could do with better service.

And the reality is the man is seventh on the all-time leading Premier League scorers list with 157 – he’s a proven goalscorer.

It may have gone out of fashion in recent times, but Defoe is the prime example of a ‘little man’ to partner West Ham’s ‘big man’ Andy Carroll.

The tactic that was used so effectively by England in the past when they combined Defoe and Peter Crouch can still be effective.

Carroll has found it difficult at times this season being a lone frontman – so Defoe could be the perfect man to help Slaven Bilic get the best out of him.

Home is where the heart is

Defoe was given an opportunity in the first team by West Ham in 2001 following a good loan spell at Bournemouth, so the club will always have a place in his heart.

Defoe spent two-and-a-half successful years leading the Hammers’ line before he was snapped up by Spurs for £6 million.

He scored 41 goals in 105 league and cup games for the Hammers, but since then he has gone onto enjoy two separate spells at Tottenham, as well as playing for Portsmouth, Toronto, Sunderland and England.

The 34-year-old is an experienced campaigner now and he may see it as fitting to return to his childhood club for a few years before hanging up his boots.

In other West Ham transfer news, Why West Ham should sign this former PL flop.