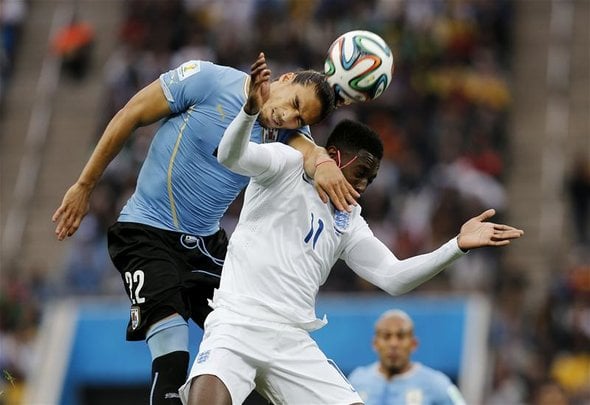 The Hammers have struggled to find a member of their squad to fill the void on the right side of defence this season, with Michail Antonio, Havard Nordtveit and Sam Byram all playing there with mixed results.

With Antonio far better suited to rampaging in the opposition half than his own, Nordtveit struggling to adapt since his summer move and Byram renowned for his susceptibility to injury, here are three reasons why Caceres should be signed.

The Hammers were reportedly interested in a number of right-backs throughout January, but failed to secure the signature of any right-sided defenders. French publication Le 10 Sport claimed that St. Etienne rejected an approach from the east London side for Kevin Malcuit, while Bleacher Report correspondent Dean Jones revealed interest in PSV Eindhoven ace Santiago Arias from the Hammers. With January now over and the right-back hole yet to be filled, free agents should be targeted and Caceres fits that bill.

The 29-year-old has played for some of the best clubs in Europe during his career. Playing for La Liga winners Barcelona, Europa League winners Sevilla and most recently Italian champions Juventus, Caceres known what it takes to reach the top level. Training with the likes of Lionel Messi, Paul Pogba and Carlos Tevez, the Uruguay international will possess plenty of knowledge that he can share with the Hammers squad as Slaven Bilic looks to take his side to the next level.

Bring the best out of Carroll

Known for his willingness to get forward on the right flank, Caceres possesses the ability to centre the ball with precision and danger that could see Andy Carroll profit. The former Liverpool and Newcastle star has got on the end of plenty of crosses from left-back Aaron Cresswell, but is yet to prove as successful with crosses from the right as the Hammers are yet to prove him with a right-back that can consistently provide inch-perfect service. Signing Caceres could see Carroll become a lot more prolific, and in turn improve the Hammers’ goal threat.

In other West Ham transfer news, this Sky Sports pundit has given his verdict on the Hammers’ transfer business.