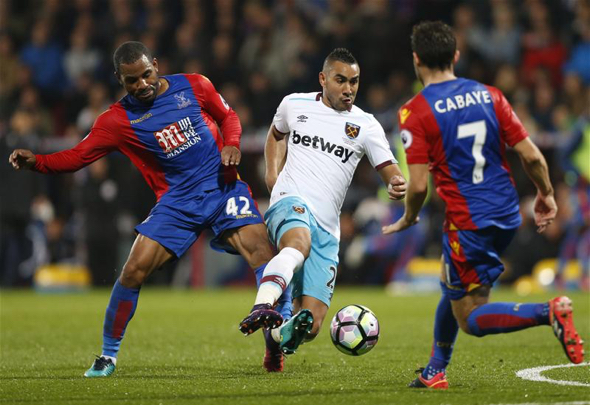 West Ham have endured a difficult season so far and have failed to match the high expectations of their supporters.

The Hammers managed a seventh-placed finish in the Premier League last campaign and moved to the London Stadium over the summer.

Slaven Bilic’s side were eliminated from Europe in the qualifying rounds and have struggled to find any consistency in the Premier League.

West Ham are just a point above the relegation zone after the opening 13 games and are certainly way short of their European ambitions.

The Londoners do have an EFL Cup quarter-final on Wednesday against Manchester United to look forward to, but Bilic will be seriously concerned about their league position.

West Ham have struggled in front of goal this season, scoring just 14 goals from their opening 13 league games.

Bilic does have several forward options to choose from, but Andre Ayew and Diafra Sakho are only just returning from long-term injuries, while Andy Carroll is still out with a knee injury.

The Hammers also have Simone Zaza and Jonathan Calleri on loan at the club, but neither of the have scored after a combined 20 games across all competitions.

Right-wing back Michail Antonio is their top scorer in the league (6) and has looked their biggest goal threat.

The Hammers will need to find a regular goalscorer if they are to climb the league table.

West Ham have certainly suffered from Dimitri Payet’s lack of goals this season.

The 29-year-old has managed just two goals from 13 games across all competitions and is yet to show his form from last season.

The France international was pivotal in the club’s success during the 2015/16 campaign and set extremely high levels.

Payet chipped in with 15 goals in 44 games last season and will need to rediscover that form to help his side steer away from the relegation places.

He has managed six assists this campaign but his team are struggling without his goal contribution.

Defensive troubles have been crucial to the club’s slow start, with just three clean sheets from the opening 13 league games.

The Hammers have conceded 24 Premier League goals already and leaked four against both Watford and West Brom.

Bilic has resorted to a three-man defence in recent weeks to try amend the situation, but individual errors cost them in a 3-2 defeat against Tottenham.

West Ham will need settled on their best line-up in the coming weeks and could climb the league table if they are built on a strong defence.

In other West Ham news, the club’s supporters reacted on Twitter to Andy Carroll’s training return.