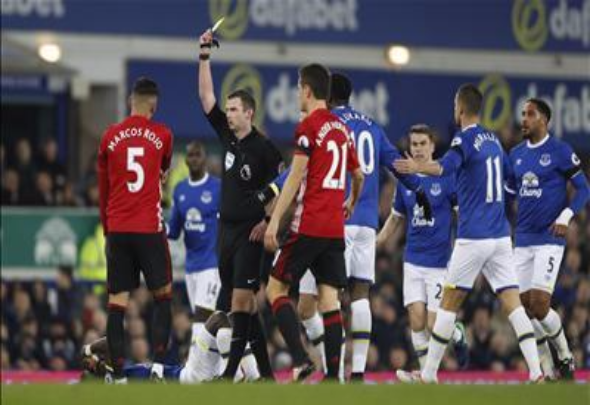 Marcus Rojo is a liability

The 26-year-old defender started at centre-back against Everton, but he must be axed by manager Jose Mourinho in future matches.  The Argentina international should have seen red for a first half lunge on Idrissa Gueye and was also beaten by the Everton attackers on numerous occasions. Mourinho is known for building his team around a solid defence and based on Sunday’s display, Rojo is not up to the quality.

It is well documented that the Spain international fell out of favour under Mourinho at Chelsea before completing a move to Manchester United. That had seemed to change at the Old Trafford club and he has played in 18 fixtures, providing two goals and scoring five already this campaign. He would have been key for the Red Devils on Sunday, as numerous attacks broke down as they fell to Paul Pogba, Anthony Martial and Zlatan Ibrahimovic in the attacking positions. Mata is known for his quality distribution and ability at keeping the ball and he would have been the difference between three points and one point for United.

Manchester United made a number of high profile signing in the summer. Eric Bailly and Paul Pogba joined for massive fees, while the world renowned Zlatan Ibrahimovic signed on a free. However, Mkhitaryan, who has only recently broken into the team is proving to be United’s best bit of business. The Armenia international was a constant threat to the Toffees back four and he has started to show why he won the Bundesliga Players’ Player of the Season in the last campaign. Pogba and Ibrahimovic both gave lacklustre performances against the Toffees, despite the latter’s goal, while Bailly was restricted to a bench position.

In other Manchester United news, Jose Mourinho has made a U-turn on this player.