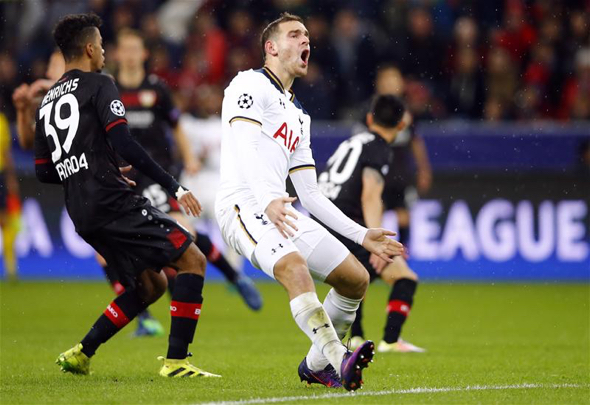 Football Insider analyses three talking points from Tottenham’s 2-1 defeat against Monaco as they crashed out of the Champions League on Tuesday night.

The evidence from Spurs’ 17 Premier League and Champions League matches this season, not to mention their League Cup elimination at Liverpool, is that the squad is not strong enough to fight on all fronts. The Londoners have paid the price for a poor summer transfer market, Victor Wanyama notwithstanding, and the lack of investment in a squad that pales in comparison with some of the Premier League big guns. Mauricio Pochettino’s side are worryingly reliant upon Harry Kane for goals and even their famed defensive solidity was absent as they crashed out of the Champions League.

For the first time in a Premier League or Champions League match this season, Jan Vertonghen was not in the Tottenham starting XI. With one eye on Saturday’s clash against Chelsea, Pochettino made the surprise decision to rest the Belgium international and pair Eric Dier and Kevin Wimmer at the heart of the defence. The move backfired. Dier and Wimmer appeared like they had been introduced for the first time only at kick-off as Monaco tore open the visitors’ defence at will. At least, Vertonghen will be refreshed at the weekend, where he is set for a tough assignment at left-back as a stand-in for the suspended Danny Rose and injured Ben Davies.

Winks is destined for big things

What a few days in the Spurs career of Harry Winks. Just over 72 hours after marking his first Premier League start with his debut goal for the club, the 20-year-old was included in a Champions League starting XI for the first time. Winks did not add to his goal tally for Spurs, but looked comfortable on the ball, drove purposefully forward with the ball and provided plenty of energy from his central midfield station. It is early days for the boyish-looking midfielder but the clear impression is of a player who has already gained the trust of Pochettino and is destined for big things.

In other Tottenham news, Spurs are to open talks with a 24-year-old south American and a four-year deal will be offered.