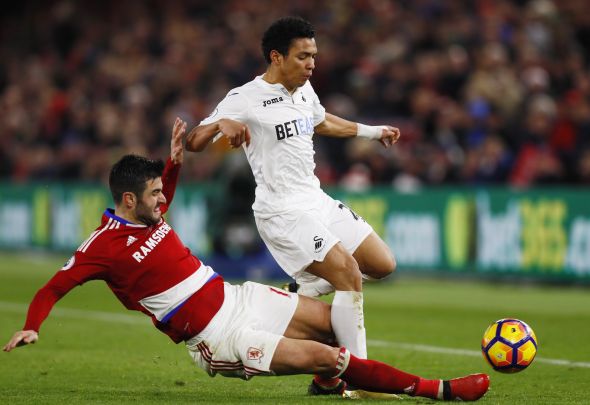 Leeds are competing for promotion from the Championship this season and manager Garry Monk has assembled a formidable squad at Elland Road.

The Whites are fourth-placed in the league table and look set to compete in the play-offs at the end of the season.

The Yorkshire giants have been able to name a familiar starting XI throughout most of the campaign as several of Monk’s signings have made a good impact.

However, the 38-year-old has rotated frequently between his wingers and nobody has managed to cement their starting position.

Here, Football Insider looks at three wide men Leeds should consider signing next season, regardless of whether they are in the Premier League or not.

Leeds should consider a move for Middlesbrough ace Adama Traore, who could be set for a relegation from the Premier League this season. The Yorkshire giants would certainly have a leverage if they can secure promotion to the top-flight and offer the 21-year-old the chance to stay in the Premier League. Traore is a pacy winger with huge potential and has shown his qualities so far this season. He can be criticised for his final ball, but Monk could be the perfect boss to help him become the finished article. Traore glides past defenders with brilliant ease and would certainly become a firm favourite at Elland Road.

Leeds could try and convince Premier League leaders Chelsea to loan out emerging youngster Charly Musonda. The 20-year-old has been unable to force his way into the first-team this season and would benefit hugely from a loan spell in English football. The tricky wide man spent almost a year with Spanish club Real Betis, making 24 senior appearances for them. He is a highly rated youngster that is desperate to make an impact at Stamford Bridge, but should follow in the footsteps of Tammy Abraham. Abraham has thrived on loan at Bristol City this season in the Championship and Musonda could look to emulate his club-mate at Elland Road. Leeds need wingers with creativity and a goal threat, something that Musonda would be able to help add.

The most likely of the three moves would certainly be Swansea ace Jefferson Montero, who Leeds were reportedly tipped to sign in January. Instead, they signed Barrow on loan from Swansea, but should definitely consider a move for Montero in the summer. The 27-year-old has endured a difficult season so far due to injury and has made 13 appearances. However, the tricky winger has proved in the Premier League his qualities since his arrival in. Monk was the manager that signed Montero for Swansea in 2014 and should pursue a reunion with the Ecuador international. He is blessed with lightning pace and would add some extra quality to the Whites squad.

In other Leeds transfer news, they have joined the chase to sign a Rangers forward.