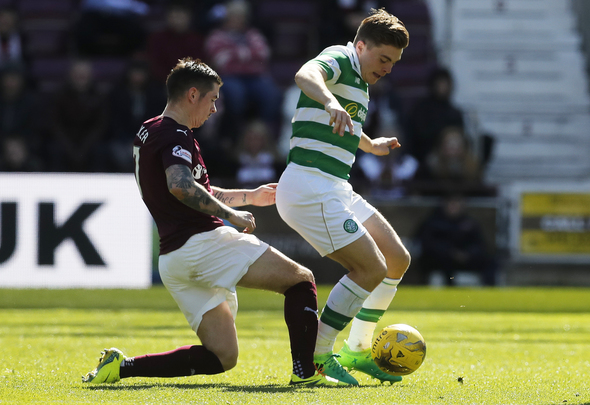 Football Insider takes a look at Celtic’s three worst players in their 5-0 win over Hearts at Tynecastle on Sunday.

When your team scores five goals but you struggle to make an impact in front of goal, you know it isn’t your day. McGregor had a goal ruled out in the early stages of the game as he was flagged offside by the linesman. The 23-year-old failed to time his run through the Hearts defence, but at the same time Scott Sinclair should have been quicker to execute the through ball. McGregor was slotting in the No 10 role ahead of Stuart Armstrong and didn’t really do it justice. His deeper lying teammate found the back of the net with a stunner while the ex-Notts County loanee squandered a big chance to open the scoring when he missed the target while the scores were still level. It wasn’t a good day for McGregor and Brendan Rodgers might be thinking about whether he deserves to keep his place in the side.

It was hard to tell that Forrest was actually on the pitch at times. Even though it was a 5-0 win there were still some anonymous performances, and the 25-year-old was perhaps the quietest player in the green and white Hoops on Sunday afternoon. He showed his ability to cross the ball into the danger area but never really found a teammate. Forrest enjoyed a blistering start to the campaign but after suffering a thigh injury in December he is yet to recapture that form. The winger’s place in the starting line-up could be under threat when Moussa Dembele is back from injury with loan-star Patrick Roberts finding the net in the rout.

Celtic didn’t get off to the best start at Tynecastle and Boyata’s performance proved that. The 26-year-old may have been suffering from complacency in the opening stages as a couple of times he was caught ball-watching when Hearts staged a couple of promising attacks. Although forays into the Celtic box were at a premium in the second period, Boyata still didn’t do a lot that would suggest he is Rodgers’ first choice centre-back when Jozo Simunovic put in a tidy shift alongside him. Erik Sviatchenko missed Sunday’s game through illness and could make his way back into the side to face Partick on Wednesday.

In other Celtic news, Scott Brown has highlight who he thinks has been the key man in the Bhoys’ title-winning campaign.