West Ham fell to a miserable 2-1 defeat at home against London rivals Chelsea on Monday evening.

It was result which ensured that the Blues maintained their dominance at the top of the league, while the Hammers have sunk into eleventh.

A number of the West Ham team had nights they will quickly want to forget, but here, Football Insider analyses the three worst players from the defeat.

Noble’s commitment and contribution to the West Ham team can not be doubted since he made his debut in 2004.

However, the 29-year-old’s best days seem to be behind him and on Monday it only further highlighted how much damage a stray pass from the midfielder can cause.

The former England Under-21 international handed the ball to Chelsea in the final third, allowing the top class team  to break on the counter.

It resulted in Antonio Conte’s side’s first goal and added further damage to a poor season from the club captain.

It may be unfair to call out the Senegal international for putting in a poor shift in an unfavoured right-back position.

However, he was quite frankly appalling at the London Stadium and whenever Chelsea attacked down his side the alarm bells rang.

The Senegal international had to resort to hacking down his opponents due to his lack of quality in the full-back role.

Fans will now be hoping he is back in the midfield for Saturday’s clash with Bournemouth, as he is usually very strong in the centre.

The 33-year-old January signing had a nightmare outing against Manchester City on his debut and if his mistake got properly punished on Monday there would likely be serious doubts over his ability.

The Portugal international went rushing for a ball he could never win and was left for dead by Chelsea attacker Eden Hazard.

It was only Diego Costa’s poor finishing which prevented him from scoring due to Fonte’s mistake.

Now, the £8million winter signing has not helped his side to a clean sheet in any of his first five appearances for the club and there must be questions as to whether the likes of Toby Alderweireld, Virgil van Dijk and even Pepe in the national team made him look more accomplished than he is.

In other West Ham news, fans have urged Slaven Bilic to drop this 29-year-old against Bournemouth. 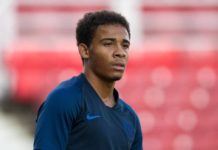