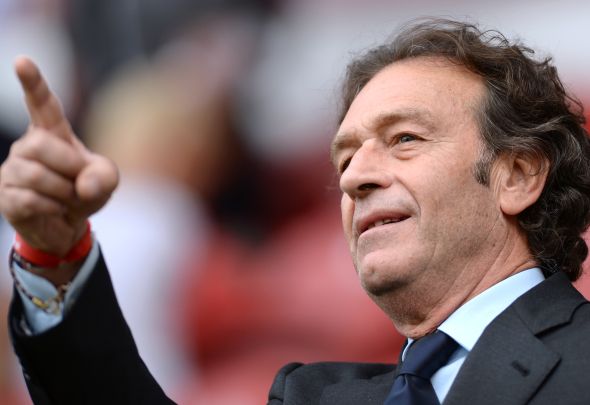 The supporters have long campaigned for the Italian to quit the club or be removed from Elland Road but they now hope they will get their wish once and for all.

This comes after Cellino was filmed by Telegraph undercover reporters suggesting a bogus firm could buy a 20 per cent stake in Leeds to circumvent third-party ownership rules.

“Mr Cellino has shown time and time again he is unfit to run a club the size of Leeds United,” read the statement on Thursday by the Time To Go Massimo group.” The revelations in the Telegraph go further. By offering to bend the rules in this way, he has shown himself to be an unfit custodian of our great club.

“We absolutely abhor the notion of corruption and unethical practices in football, considering hard working fans fund the industry week-in, week-out. The fact that corruption is apparently occurring at our own football club is deeply concerning.”

Leeds issued a statement on their official website on Wednesday night that defends the Italian chairman, saying he is innocent of any wrongdoing and dismissing the Telegraph revelations as a “non story”.

Time To Go Massimo added: “We also believe that the statement from the club that this is a ‘non-story’, shows utter contempt for the fans.

“Even if it is found that Mr Cellino is not guilty of breaking the rules regarding third-party ownership, the fact that he is willing to share profits on transfers with an investor is deeply concerning – this money should be going to fund future transfers so Leeds United can be a successful football club again. Investors should only make a return on their investment when the club is successful, not bleed it dry.

“Massimo Cellino must end his association with Leeds immediately.”

In a meeting at Leeds’ training ground with football agent Pino Pagliara, Cellino proposed a way that the fund could effectively  finance the purchase of players and then profit from their sale.

The owner goes onto explain that due to the rules he could not simply “give an outside firm a percentage of the sale of the player”, but he did propose the company bought shares amounting to 20 per cent of the club, in return for which it would receive a 20 per cent cut of future sell-on fees from transfers.

“The club (Leeds) has reviewed the supposed ‘evidence’ that the Telegraph have published tonight,” the Leeds statement reads. “At no time in this video clip has Mr Cellino suggested getting around the FA’s rules on third-party ownership of players.

“Mr Cellino has made a perfectly proper suggestion which is entirely consistent with the FA’s regulations. The Club intends to make no further comment on this non-story.”

The 60-year-old owner is currently the subject of an FA inquiry into allegations that he agreed an illegal payment of £185,000 during the transfer of Ross McCormack to Fulham.

Cellino, who owns 100 per cent of Leeds through company Eleonera Sports, was named alongside Barnsley assistant manager Tommy Wright and QPR manager Jimmy Floyd Hasselbaink in the Telegraph sting. Wright has since been suspended.

The Telegraph has conducted an undercover investigation into a number of managers and owners across the country using an entrapment technique that has seen Sam Allardyce axed as England manager.

In other Leeds news, fans have reacted on Twitter to Cellino’s reported involvement.