Tottenham have launched a bid to try sign centre-forward Alassane Plea from Ligue 1 side Nice, according to a report.

Foot Mercato claims that Spurs have submitted an initial £22million offer for the French striker, as they look to find a back-up option to Harry Kane.

It is understood that the 25-year-old is a plan B option for manager Mauricio Pochettino, with Manchester United’s Anthony Martial top of his wishlist.

Both Vincent Janssen and Fernando Llorente have failed in their roles as second-choice striker at Spurs in the last two seasons, which is why the North London club must try bring in fresh competition for Kane this summer. They have reportedly made an official move to try sign Nice’s rapid attacker and feel he could be the solution to a long-term problem. He enjoyed a brilliant campaign in the 2017/18 season for Nice, scoring 21 goals and supplying seven assists in 49 appearances across all competitions. Pochettino needs another proven goalscorer in his squad to try compete with the world-class Kane and it remains to be seen if Plea can do that. However, he has proven himself to be an upcoming star in French football and a switch to the Premier League may suit his style of play. Spurs’ business in the summer transfer window must be around improving the squad, as they already have a formidable starting XI that can challenge most on their day. 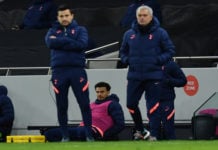