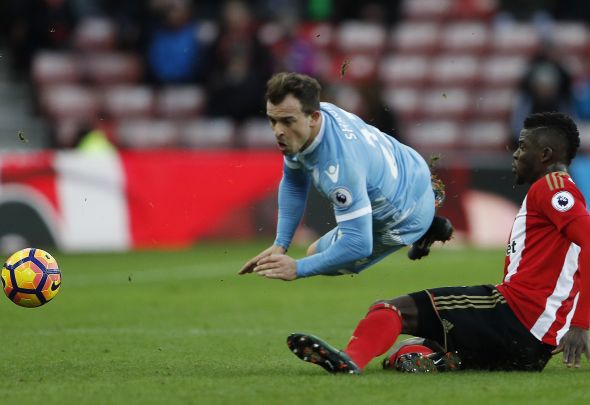 Tottenham could be in for a difficult test against Stoke on Sunday after Mark Hughes revealed two of his senior stars are set to return from injury.

Spurs go into the game on Sunday in poor form after being knocked out of the Europa League in the Round of 32 by Belgian side Gent on Thursday night, losing 3-2 on aggregate.

Hughes revealed to Stoke City’s official website that Xherdan Shaqiri and Geoff Cameron are set to return to action against Spurs, after spending time on the sidelines through injury.

“Xherdan Shaqiri is okay again now and available for selection,” Hughes said. “Geoff is very close too – the game may come a little too soon for him but at the moment he is in my thoughts.

“Walts is maybe a little bit behind the two guys I have just mentioned but he is making good progress too.”

Spurs will have to be wary of Swiss attacker Shaqiri, who is likely to provide the majority of Stoke’s attacking threat in north London, should he start.

Scoring goals against the likes of Hull and Middlesbrough while being sidelined for much of the campaign with a calf injury, Shaqiri will now be looking to hit the ground running on his return.

USA international Cameron has been sidelined since October with a long-term knee injury, but could also return to bolster the Potters’ defence.

Tottenham will still be expected to secure three points at home, with a 15th Premier League win enough to take Mauricio Pochettino’s side into second place with Man City not in action this weekend.

In other Tottenham news, Jermaine Jenas believes this senior figure could leave Spurs if this happens.