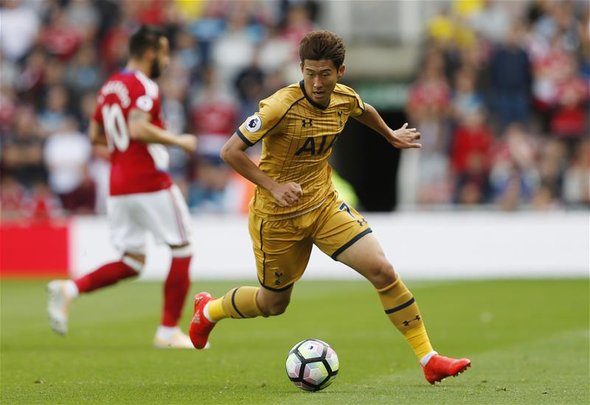 Paris Saint-Germain are considering a move for Tottenham attacker Heung-Min Son, according to a report.

The Evening Standard claim that the French champions are keen to improve their attacking options and have shortlisted Son as a possible target.

The report details that Spurs are likely to ignore any bids in the January transfer window despite the interest from PSG.

Son completed a £22million to White Hart Lane in 2015 and has made 60 appearances for the north London club.

The 24-year-old is currently enjoying a good season for Spurs, scoring six goals and supplying five assists in 20 matches.

He usually operates from the left wing, but has also been deployed as a central forward during the absence of talisman Harry Kane.

Mauricio Pochettino has built his squad on hard working players and Son certainly matches that ethic.

PSG are currently trying to sign Wolfsburg attacker Julian Draxler according to the Evening Standard report, but the futures of Angel Di Maria and Jese are uncertain.

Son could be tempted with a move to the riches of PSG after they reached the qualifying rounds of the Champions League unlike Spurs, who have dropped down to the Europa League this season.

Tottenham should repel any offers from PSG for Heung-Min Son, who is now beginning to show his best form for the club. The South Korea international gives Spurs a different option in attack and he is very direct in his thinking. Pochettino is not blessed with a large amount of attackers and they need Son for their title aspirations this season. He has also shown lots of potential since his move to White Hart Lane and is proving to be a key player under Pochettino. Son is still improving at the age of 24 and is already becoming a popular figure with the club’s supporters.

In other Tottenham transfer news, Pochettino has been given the green light for three players to quit in January.