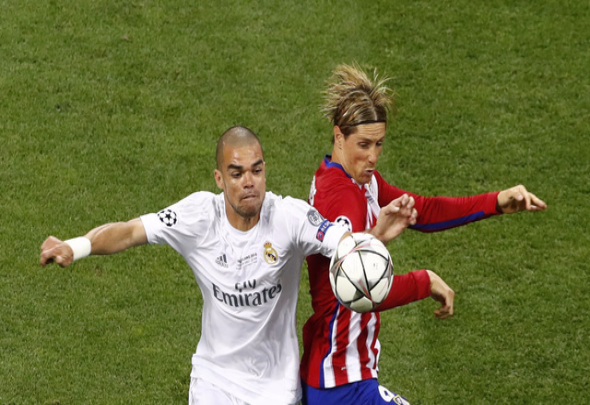 Tottenham have been linked with a move for Real Madrid centre-back Pepe, according to a report.

However, Madrid are also keen on keeping the Portugal international and have offered Pepe, who’s contract ends in the summer a new one-year deal.

But, the report states that the experienced player is wanting a two-year contract and all negotiations so far have come to nothing.

Pepe has been at Real Madrid since 2007, signing from Porto for a huge £25.5million deal.

He has played 327 times for the European giants during his nine years at the club, winning two Champions League titles alongside two La Liga crowns.

However, the European superstar has fallen behind up and coming French star Raphael Varane under Zinedine Zidane this campaign, playing just 11 times.

But, Pepe showed he can still play at the top level in summer, playing a key role in the back four for Portugal as they went on to win the Euro 2016 trophy in France.

Tottenham currently have the second best defence in the Premier League, but they may be looking for better depth behind star duo Toby Alderweireld and Jan Vertonghen.

It is unlikely that Pepe will get in the back four ahead of either of Alderweireld or Vertonghen despite his quality and experience. This means that he isn’t really going to trade the Madrid bench for the one at White Hart Lane. Pepe would be a quality addition to any side in the Premier League and as he’s right footed he would cover Alderweireld in the Spurs defence, who is currently being covered by the versatile Eric Dier. However, right now a move to Tottenham looks unlikely to happen, especially with the other clubs interested, including a potential big money move to China as he nears the end of his career.

In other Tottenham transfer news, Spurs have moved a step closer to clinching this £30million deal.