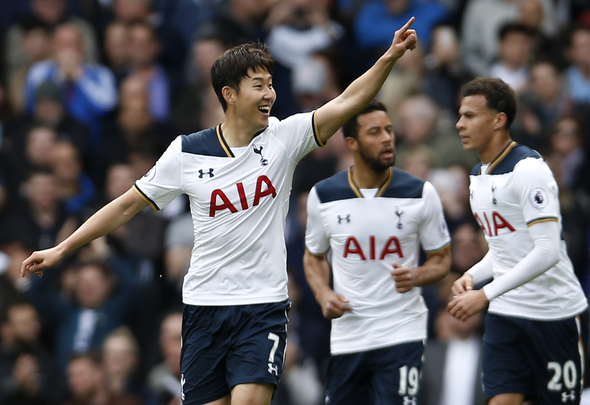 Tottenham are set to drop in-form attacker Heung-Min Son from the starting line-up against Chelsea on Saturday.

Spurs face the Blues in an FA Cup semi-final as they put their league rivalry to one side.

Mauricio Pochettino is expected to make one change from the team that beat Bournemouth 4-0 in their last game, with attacker Son dropped and replaced by midfielder Victor Wanyama.

The north London club are expected to field their best available XI as they go for silverware and Pochettino is set to resort to a 3-4-3 formation.

They used the system to cancel out Chelsea earlier this season in a 2-0 win and are likely to do the same at the weekend.

Son’s expected omission from the side will be a harsh decision as he has managed 19 goals across all competitions this season.

Lloris is set to continue as the goalkeeper, despite back-up Michel Vorm playing in every previous FA Cup round.

Meanwhile, a switch to a three-man defence would see Eric Dier drop back and slot in alongside Toby Alderweireld and Jan Vertonghen.

Kyle Walker is likely to start in the right wing-back slot, while Ben Davies continues in the absence of the injured Danny Rose.

Wanyama and Mousa Dembele could make up the midfield pairing, who will be hoping to nullify PFA Player of the Year candidate N’Golo Kante.

That leaves a deadly front trio of Christian Eriksen, Dele Alli and Harry Kane, who has been the preferred options when available.

Son would consider himself unlucky to be left out at Wembley, especially after scoring five goals in his last four games.

In other Tottenham team news, the club’s young defender has been ruled out until next month.