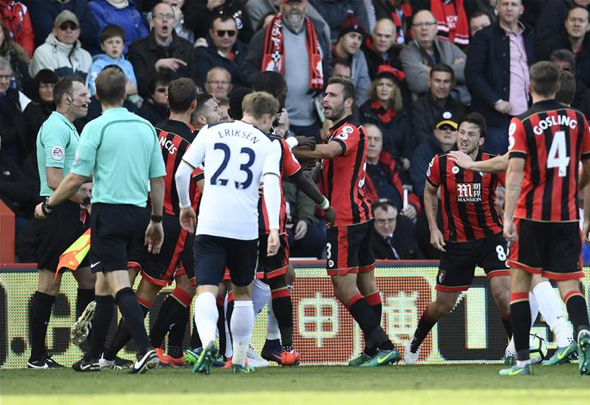 Tottenham are set to recall Moussa Sissoko to their starting XI against West Ham.

Spurs host the Hammers in the Premier League and the midfielder is expected to return to the side with defender Kevin Wimmer dropping to the bench.

Manager Mauricio Pochettino is set to resort back to a 4-2-3-1 formation instead of the three-man defence he used in the 1-1 draw against Arsenal before the international break.

Sissoko, 27, has served his three-game domestic ban for elbowing Bournemouth’s Harry Arter and could be thrown straight back into the starting line-up.

The midfielder is yet to register a goal or an assist this season since he moved to White Hart Lane for £30million from Newcastle, but has made just nine appearances due to suspension and injury.

Spurs will be without senior players Toby Alderweireld, Erik Lamela and Ben Davies against West Ham, while Dele Alli is considered a major doubt.

The north London club are without a win in their last seven games in all competitions and 17th-placed West Ham should present a good opportunity to end that run.

Hugo Lloris is set to continue as the number one goalkeeper, with regular full-backs Danny Rose and Kyle Walker both coming through international duty with England unscathed.

Eric Dier is set to continue his role in defence alongside Jan Vertonghen and look to fill the huge void left by the injured centre-back Alderweireld.

Moussa Dembele’s man-of the-match display against Arsenal means he is set to partner consistent performer Victory Wanyama in midfield, with the latter making a great impression since his his summer move from Southampton.

Spurs have not scored more than one goal in a match in their last seven matches and the return of Kane will be a huge boost for Pochettino, after he was rested by England manager Gareth Southgate.

Kane had been absent since September 18 but managed 73 minutes against Arsenal, scoring his side’s equalising goal from the penalty spot.

In other Tottenham team news, Dele Alli has trolled Eric Dier in their latest amusing spar.