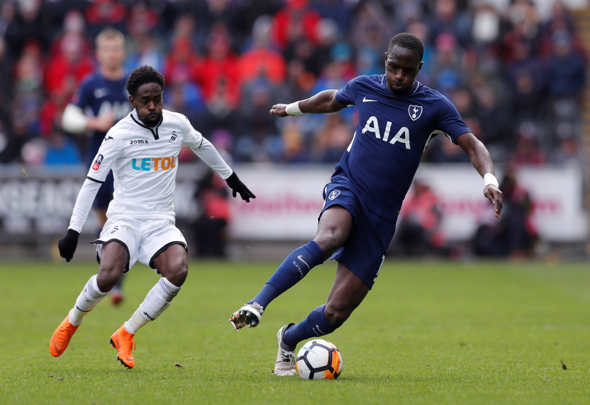 Tottenham fans have taken to Twitter to lay into Moussa Sissoko after his cameo performance in their 2-0 Premier League win against Watford on Monday night.

Spurs moved a step closer to qualifying for next season’s Champions League with a scrappy victory at Wembley Stadium.

Goals from Dele Alli and Harry Kane took the  fourth-placed Londoners five points clear of Chelsea with only three matches to play.

But Tottenham fans were not entirely happy with the manner of the triumph and singled out the display of Sissoko, who replaced Son Heung-Min after 74 minutes, for criticism.

Two supporters claimed he is the “worst player to put on a Spurs shirt”, while another panned him as a “donkey” as almost universal criticism was heaped on the France international.

Happy with the 3 points. What I’m not happy about is Sissoko coming on ahead of Lucas Moura. He’s a donkey. Proved that with non existent finish. Guys a clown. Lucas Moura will be wasted and then be sold and show what he can do when he plays for a manager that has faith in him ????

Sissoko the worst player to put on a spurs shirt. Don’t @ me.

Sissoko literally gave me cramp tonight. When he skied his shot into row z I got cramp in my leg jumping up in frustration. I will always back him when he’s wearing a Spurs shirt but surely he should be one of the names we are looking to sell and improve on?

What pictures does Sissoko have of Poch?

When will you realise Dier, Davies, Sissoko and Lamela are all liabilities?

And Sissoko can’t actually control a football. End of.

I don’t understand why we brought in Lucas Moura in January and still play Lamela & Sissoko ahead of him.

Surely Sissoko will be gone in the summer so why is he still getting minutes over Lucas Moura???? #coys https://t.co/8x1TWuVbnn

Sissoko is the worst player ive ever seen at spurs, considering i was born in 94 and seen us in the 2000s thats seriously impressive

Kane netted his 27th league goal of the season – his 38th in all competitions – in the 49th minute when he steered in Kieran Trippier’s pass.

That goal means Kane is four behind Liverpool’s Mohamed Salah, who has 31, as the England centre-forward aims to win the Golden Boot – awarded to the Premier League’s leading goalscorer – for the third successive season.