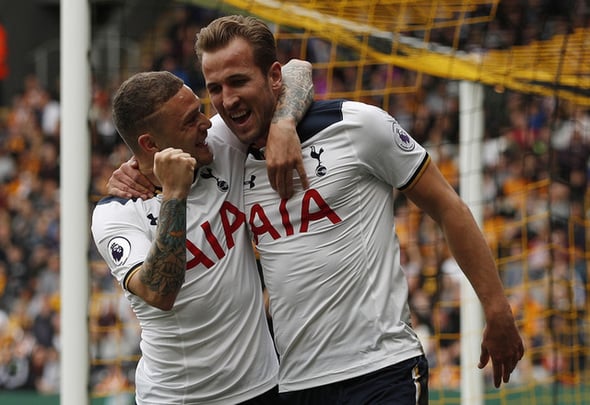 Tottenham fans have taken to Twitter to rave about Kieran Trippier for his performance in their 2-0 Premier League win against Watford on Monday night.

Spurs moved a step closer to qualifying for next season’s Champions League with a scrappy victory at Wembley Stadium.

Goals from Dele Alli and Harry Kane took the  fourth-placed Londoners five points clear of Chelsea with only three matches to play.

Trippier was selected at right-back ahead of Serge Aurier and played the full 90 minutes of a match that manager Mauricio Pochettino had hailed beforehand as vital.

The right-back continued his excellent form against Watford by providing the cross which Orestis Karnezis fumbled in the build-up to the first goal and then set up Kane for the second.

Trippier, 27, has come in for criticism from a large section of Spurs fans at various times this season, with many highlighting his defending as a major issue, especially against strong teams.

But the England international was widely hailed as the hero by supporters after the match, an unexpected position for the player hailed last night as “a punk” and even “world class”.

Bet Watford would pay 50 million for Trippier, world class everytime we play them

Trippier is a punk and I fully approve #coys

We made really hard work of that tonight, thankfully we had Hugo ensuring a clean sheet. Going home us fans were unanimous, tonight’s performance nothing to write home about but it was 3 points. Trippier was our best outfield player. #COYS #THFC

Average Performance. Good win. Crucial victory what with Chelsea nipping at our heels. My MOTM goes to Trippier. Kane was all over the place but i’m still not convinced… #COYS

I must say Kieran Trippier been playing well for sometime, but tonight his deliver into the box has been sublime. #COYS ????