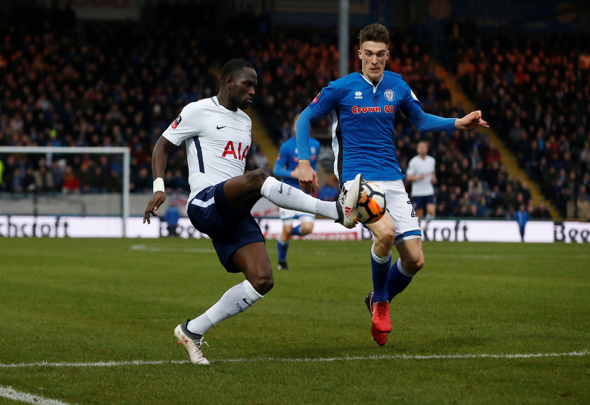 Tottenham headed to Spotland on Sunday to play against Rochdale in the fifth round of the FA Cup.
It was a quiet opening to the first half as neither side took command of affairs on the newly resurfaced pitch.
Spurs were a shadow of the side that drew with Juventus in the Champions League midweek as the League One side looked a threat at times.
The Dale went close in the 17th minute when Victor Wanyama was dispossessed inside his own half which led to an Ian Henderson shot on the Lillywhites goal which was not strong enough to find the back of the net.
But it was the performance of French midfielder Moussa Sissoko that had Spurs fans up in arms.
The 28-year-old was given his place in the starting line-up in place of Mousa Dembele who starred in Turin on Tuesday night and was key to the side’s 2-2 draw against the Serie A side.
And with Lucas Moura making his debut for the North London outfit, the energetic debut of the Brazilian had supporters drawing comparisons between the two players.
Spurs should have taken the lead midway through the first half but Fernando Llorente could not find the back of the net after Sissoko’s poor ball to him.
In the end, a late Rochdale goal gave the lower league side a shock lead with Tottenham up against it again after the Newport scare last round.
And Tottenham fans are blaming Sissoko – here is a selection of Twitter reactions after his first-half display:
https://twitter.com/PaulD_79/status/965257110165557248

9 mins into an FA cup tie at Rochdale and Moura has already done more for Spurs than Sissoko.
We have a player on our hands, lads !

Moura is rapid! Sissoko still himself with that poor ball to Son then

Sissoko trying to set up Llorente, who was no more than five yards away..one of the worst passes I’ve ever seen probably 😂

In other Tottenham news, Pochettino reveals ‘massive’ impact of draw against Juventus.