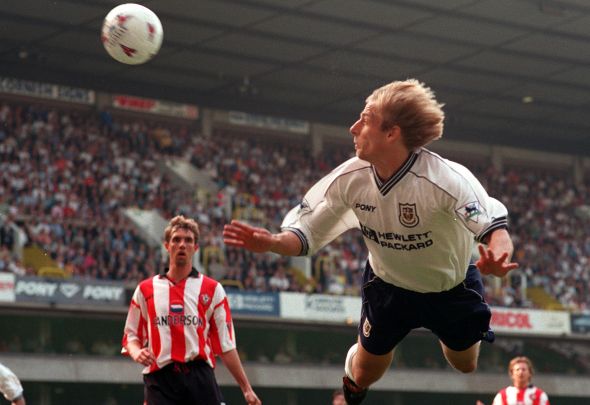 Jurgen Klinsmann made a guest appearance for Tottenham during their 2-0 win over Arsenal on Sunday afternoon – and fans on Twitter are pleased to see a legend return.

The former German World Cup winner played for Spurs during the 1990’s where he was a controversial figure on the field of play.

Klinsmann won the hearts of the Tottenham fans for his performances on the pitch as he also irritated the opposition with his diving.

One fan appreciated how former players support their club after their retirement with the likes of Ledley King and Ossie Ardiles also in attendance.

Supporters stated that it was great to see Klinsmann return as Spurs picked up a valuable three points.

Always a Spurs legend in my eyes!
Great to see you back home yesterday!#COYS

Klinsmann witnessed his former team produce a magnificent display as they beat their north London rivals in a crucial encounter.

The win means that Tottenham have closed the gap on the Premier League leaders to four points after they scored three second half goals to beat Everton at Goodison Park prior to Spurs’ fixture.

Mauricio Pochettino’s team have the chance to put more pressure on Chelsea as they play before them in the next round of league matches.

Spurs will travel across London for a tricky encounter against West Ham on Friday evening, with Chelsea hosting relegation-threatened Middlesbrough three days later.

By the time the league leaders kick off they could only be one point ahead of their London neighbours in the table.

In other Tottenham news, Slaven Bilic has sent a warning message to Spurs ahead of the West Ham clash.