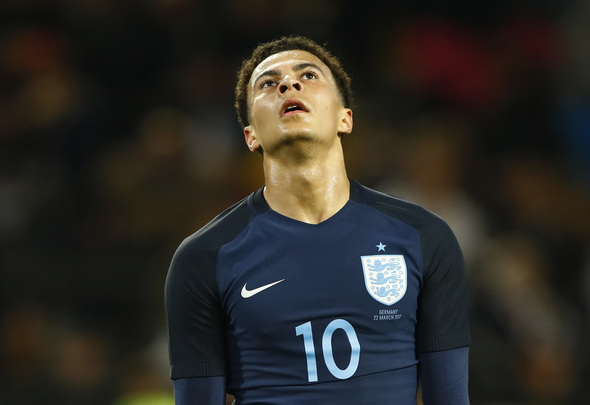 Tottenham fans have taken to Twitter to applaud a mesmerising display by Dele Alli against Germany.

The 20-year-old played well despite England succumbing to a 1-0 loss at Borussia Dortmund’s Signal Iduna Park in an international friendly on Wednesday night.

Alli earned his 16th senior international cap in the victory and was again on the lips of fans and pundits alike after a stunning display.

In the first half, Alli produced a wonderful piece of skill to embarrass Germany’s Jonas Hector and Leroy Sane as he executed a magnificent scoop-turn.

He pulled the strings in the England attack in what was a largely impressive performance in Gareth Southgate’s first game since being named as permanent manager of the national team.

Pundits have called on Southgate to build his Three Lions team around the influential Spurs maestro after a series of stunning performances at club level during the last two seasons.

The ex-Aston Villa and Middlesbrough defender won two and drew two of his four games in charge as interim boss.

Here is a selection of tweets from Tottenham supporters about Alli’s performance:

@Dele_Alli is the best player on the pitch by a mile! #GERENG #COYS

https://t.co/jJHzMOY3W2 via @BBCSport @spursofficial Alli having a monster of a game #coys

Alli has scored 19 goals and bagged 17 assists in 39 appearances in all games for Tottenham this season and has helped them move up to second in the Premier League standings.

In other Tottenham news, Mauricio Pochettino must sign this England international to execute his masterplan.