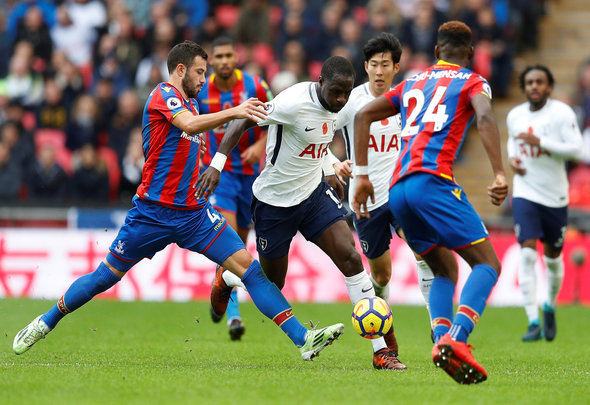 Tottenham fans were left delighted on social media with the performance of Moussa Sissoko after he starred in the club’s win over Crystal Palace on Sunday.

A second half strike from South Korean international Heung-min Son, who curled the ball from the edge of the crowded penalty box and past Julian Speroni, was enough to secure the three points for Mauricio Pochettino and his men at Wembley.

The Argentine manager had seen his hand forced into several changes due to injury, with Hugo Lloris, Toby Alderweireld and Dele Alli all out, while Michel Vorm’s injury saw third choice goalkeeper Paulo Gazzaniga make his competitive debut.

The enforced rotation also saw Moussa Sissoko return to the starting XI after appearing from the bench against Real Madrid in midweek, and the Tottenham faithful were impressed on Twitter with what they saw from the French international.

Again Sissoko has been on fire once again, Played well throughout. Lousy performances from Son and Aurier, lazy and careless.

Dier , Sanchez , rose , sissoko and Gazzinga were only top performances

Brilliant from Sissoko there, he's a surprisingly good player when trying to hold onto leads

Having been branded a flop after his £30million move from Newcastle United last season, he has established himself as a key member of the Spurs squad this campaign with 51 outings under his belt to date.

He has appeared in every one of the club’s 17 fixtures across all competitions so far, starting in 10 of those, and has managed to net two goals, with his strike against Huddersfield his first in his Lilywhites career.

In other Tottenham news, one star figure is being lined up by European giants on a shortlist including some of the world’s best in his role.