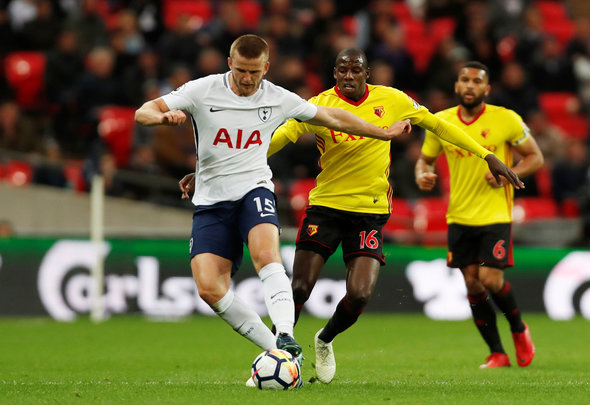 Tottenham took all three points in an assured performance against Watford in the Premier League on Monday night at Wembley with a 2-0 victory – but the performance of Eric Dier had many scratching their heads on social media..

Despite the win, supporters were not impressed with the display of the 24-year-old, with many of them questioning how they will ever be in with a shot of winning silverware with the England international in the centre of the park.

Dele Alli got his name on the scoresheet for the second game in a row, adding to his effort against Manchester United last time out and putting his tally up to 14 in all for the season, while hitman Harry Kane did what he does best shortly after the interval, smashing his effort past the Hornets stopper at the second attempt.

However, the fans’ thoughts were more on Dier’s 46th appearance of the season, and it would seem that Spurs fans aren’t certain about what it is that he does best, despite being a clear favourite of Mauricio Pochettino.

The versatile defensive midfielder, who can also be deployed as a defender, was handed criticism from every angle on Twitter, despite the win putting them to within one point of Liverpool in third with a game in hand on Jurgen Klopp’s men.

Here is a selection of some of the best reactions on social media to the display of the England international against the Hornets:

GET ERIC DIER OUT OF MY CLUB

Eric Dier is so over rated it’s a joke

Horrible Game , Eric Dier is so poor if some outfit was willing too pay 50-60 million for him he’d be out the door 🙈#COYS

Said it for ages!! ERIC DIER ISNT A MIDFIELD PLAYER!!! Too one paced and moves it too slowly! So poor lately

Eric dier getting the run around by will Hughes.

In other Tottenham news, Spurs must batten down the hatches after rival legend reveals ‘dream’ swoop of top ace.