The Telegraph claims the Frenchman wants to continue his 21-year stay as Arsenal boss beyond the end of his current contract, which expires in the summer.

Wenger, 67, has had plenty of criticism levelled at him this season from his own supporters, after the Gunners lost their sixth outing in nine league and cup fixtures against West Brom.

Now in a lowly sixth place in the Premier League, pressure on Wenger to end his tenure as Arsenal boss has been steadily increasing but he now looks set to remain at the Emirates.

A two-year contract is reportedly on the table for the Gunners boss, despite seeing his side drop to a dismal sixth place this season following the 3-1 defeat to Tony Pulis’ side on Saturday.

Tottenham fans have reacted on Twitter in humorous fashion to the news, with many amusingly tweeting that Wenger is “one of our own”.

Arsenal wenger he's one of our own #coys 💥

"Arsené Wenger he's one of our own!" Sing the Spurs fans😂 #COYS

As a Tottenham fan, I sure hope Wenger stays… https://t.co/O7Q7Iy20mz

Piers you are the gift that keeps on giving, Wenger we want him to stay, COYS ⚽

Wenger wants to stay, and MAN do I hope that he does. #COYS https://t.co/ATGqUiJk5d

Spurs now have a huge chance of finishing above their north London rivals for the first time since the 1994-95 season, as they sit nine points clear in second.

The two sides go up against each other on April 30 at White Hart Lane, in a match that could prove crucial come the end of the season.

In other Tottenham news, Graeme Souness has revealed Spurs are in danger of finishing outside the top four because of this.

Sources: Tottenham close in on new manager & this is when he will be appointed 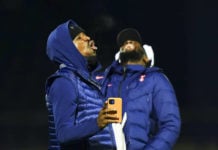 Sources: Tottenham accept bid for Aurier as deal all but done