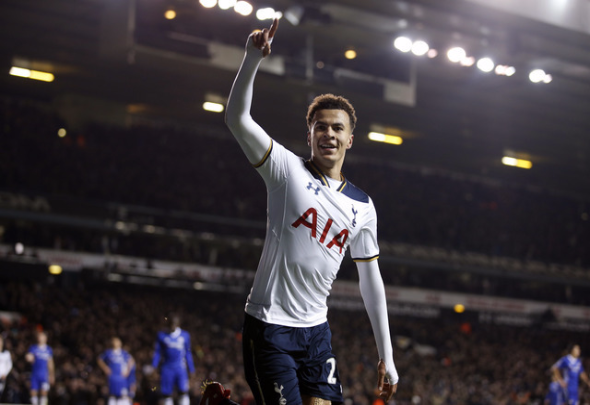 Tottenham fans reacted with excitement and confusion on Twitter after it was revealed Dele Alli and Christian Eriksen have been nominated for December’s Player of the Month award, while Mauricio Pochettino is in line for the Manager of the Month award.

The club’s official Twitter account revealed the news of Alli and Pochettino’s nomination to fans but it kick-started confusion as they failed to mention Eriksen was also nominated.

Mauricio and @Dele_Alli have been nominated for the @premierleague Manager and Player of the Month awards for December! 👏 #COYS pic.twitter.com/PiFZbjZ9yz

The shortlist is in for December's @EASPORTSFIFA Player of the Month! Who do you think should win? 🤔

The nominations follow an impressive month for Tottenham, who picked up five victories from six games in all competitions and they started 2017 in excellent fashion with a 2-0 victory over Chelsea on Wednesday.

Alli has been in sensational form and he scored back-to-back braces against Southampton and Watford before netting a third successive one against Chelsea.

He has now taken his total tally for the season to 11 goals in all competitions.

Well deserved if they both win it #COYS

@ChrisEriksen8 @premierleague No mention of our #23?

i think he plays better in january

brilliant but hopefully not the kiss of death

not sure how Eriksen isn't there as well

Alli was heavily criticised at the start of the season after he missed a number of goal-scoring opportunities but he has bounced back in sensational style.

Eriksen has been impressive too and he notched up four goals and three assists throughout December before setting up both of Alli’s goals against Chelsea this week.

Pochettino has overseen an impressive month for Spurs but he will face tough competition for the award as Jurgen Klopp, Antonio Conte and Jose Mourinho have all been nominated.

In other Tottenham news, this Sky Sports pundit has praised Alli hugely.