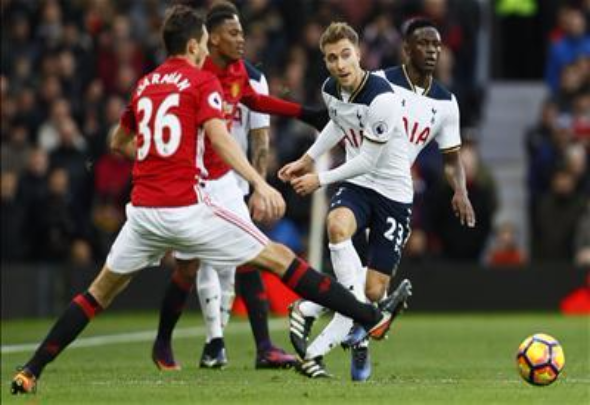 Christian Eriksen started on the right of an attacking midfield three for Tottenham against Manchester United on Sunday – and Spurs fans on Twitter were disappointed with his performance.

The 24-year-old struggled to make any meaningful passes in the final third during the 1-0 defeat at Old Trafford.

A first half goal from attacker Henrikh Mkhitaryan ensured the Red Devils all three points in the clash against the north London club.

Spurs fans on social media were not impressed by the result, or Eriksen’s final ball, with many commenting on his poor ball retention.

Son, alli and eriksen have created nothing today. Absolutely nothing. #thfc

I think we should get Eriksen on? Maybe he can create something? #sarcasm #THFC

Our front 3 behind Kane are Alli, Eriksen and Son. None of them deserve to be anywhere near the starting XI.

Eriksen has been in indifferent from this season with just five goals and four assists in 21 appearances for the side.

However, despite not reaching his usual high standards he has remained an ever-present in Mauricio Pochettino’s team.

The north London club are currently in fifth place in the Premier League and sit three points behind Manchester City in fourth place.

Tottenham are looking to improve on last season’s third place finish and after Sunday’s defeat they will take on 19th placed Hull at White Hart Lane on Wednesday.

In other Tottenham news, Spurs are braced for a bid for this £10million-rated outcast.