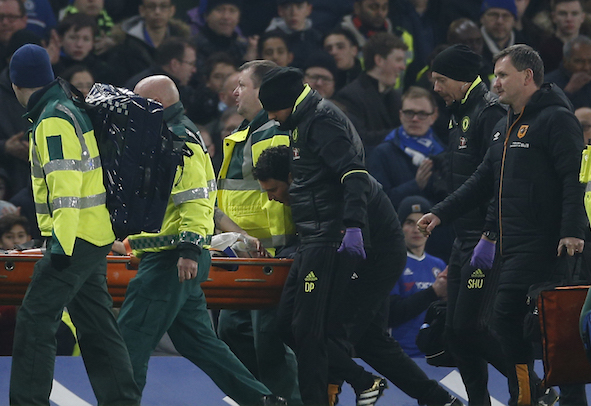 Ryan Mason suffered a fractured skull in Hull’s 2-0 defeat to Chelsea on Sunday – and Tottenham fans took to Twitter to wish the club’s academy product a speedy recovery.

The former Tottenham midfielder, 25,  underwent surgery in London on Sunday evening after sustaining the horrific injury during a collision with Blues defender Gary Cahill.

Spurs academy product Mason was given oxygen as he left the field on a stretcher after receiving treatment for around six minutes.

Hull released a statement on Sunday night to confirm that Mason was in a “stable condition” after surgery at St Mary’s Hospital in London and would remain there “for the next few days”.

Mason’s injury shook Stamford Bridge on Sunday and also caught the attention of the football world, with Tottenham fans taking to social media to express their condolences to the long-standing White Hart Lane player.

Would be cool to see COYS twitter switch to a Mase avi for some time. #COYS

Ryan Mason is one of our own.#prayforRyan #coys

Come on, Mason. Give it everything like you always have. #COYS

Wishing Ryan Mason all the best. Glad to hear he’s in a stable condition after op this eve. All the best to you Ryan. #COYS #THFC #HCFC

Mason spent 18 years at Tottenham before Hull signed him for a club-record fee of £13million in the summer of 2016.

Graduating from the Spurs academy, he went on to make 70 first team appearances for the club, scoring four goals, and also earned his sole England cap while at the club.

In other Tottenham news, a striker has signed after Spurs agreed terms.