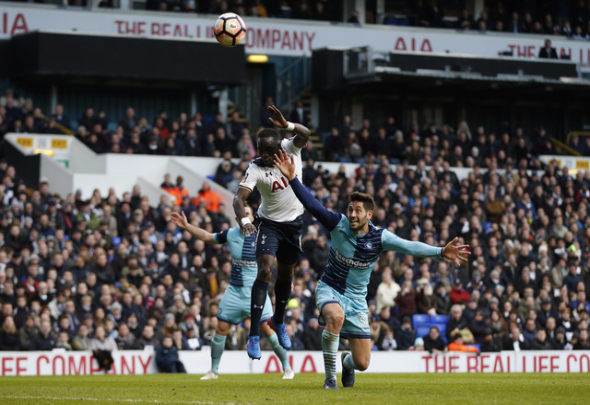 Moussa Sissoko played the full 90 minutes in the late win against Wycombe on Saturday, but the Tottenham fans on Twitter were less than pleased with what they saw.

The 27-year-old was recalled to the Spurs line-up after Mauricio Pochettino named a number of changes from his side which drew 2-2 with Manchester City in their last outing.

However, the £30million signing was less than impressive after it took a late Son Heung-min goal to ensure Tottenham made the fourth round of the FA Cup.

Two early goals from Paul Hayes saw Spurs enter half time two goals down, but strikes from Son, Vincent Janssen and Dele Alli made sure a shock defeat was not suffered after Gary Thompson put his side 3-2 up with five minutes to go.

Summer signing Sissoko played no part in any of his sides goals and a number of Tottenham fans on social media were less than complimentary of his performance.

I'd take a pound for him

How on earth is #Sissoko still on the pitch, at #Spurs costing £30M earning a fortune? #wasteofmoney #COYS #THFC #Tottenham #wewillstillwin

Sissoko equals Adebayor minus the effort and application #thfc # coys

What a last 10 minutes. That 96 minutes just killed me.
Wycombe done well. I never wanna see Sissoko near that team again.#COYS 💙

Sissoko made the big money switch from relegated Newcastle in the summer, which caused much amusement to Toon supporters.

Their opinions on their former player have seemingly been justified from the Frenchman as he has a return of just four assists in 19 appearances for Spurs in all competitions.

In other Tottenham news, here are three things we learned from Spurs’ clash against Wycombe on Saturday.