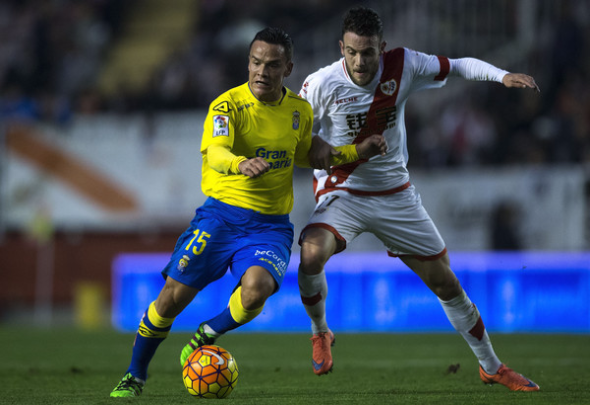 Tottenham are one of the clubs interested in Las Palmas midfielder Roque Mesa, according to a report.

Spanish outlet Marca claim that there is a long queue of sides lining up for the 27-year-old, who has been one of the standout performers in La Liga this season.

It is understood that Spurs, Everton and Liverpool are the English sides eyeing the intelligent midfield maestro.

The report details that Bayern Munich, Sevilla and Valencia are also eyeing the highly sought-after player.

It is reported that Mesa has a £26million release clause in his contract, but Las Palmas are willing to begin negotiating at £8.7million to spark a bidding war.

Mesa has been the key player for La Liga’s mid-table side Las Palmas this season and Marca claim he could be rewarded with a first ever call-up to the Spain national team as a result.

The central midfielder has made 25 appearances across all competitions this season and managed to score one goal.

WhoScored.com claim that Mesa has a pass percentage rate of 91.5 per cent this season and that highlights the value he adds to his side.

Mesa has become an important player for Las Palmas in recent seasons and helped them achieve promotion to the top-flight. The midfielder is enjoying his best season to date and is now being recognised by other clubs for his quality on the ball. He also excels at his defensive work and has picked up 10 yellow cards this season as a result. Spurs are interested in the technically gifted Mesa, but he may not be the kind of player they should be pursuing. They have youngster Harry Winks in the first-team to provide a similar role, plus Mousa Dembele and Victor Wanyama are regulars in the starting XI. The north London club could perhaps do with a midfielder with a more creative edge, someone who could help provide goals and assists.

In other Tottenham transfer news, the club are preparing a bid for a European playmaker.