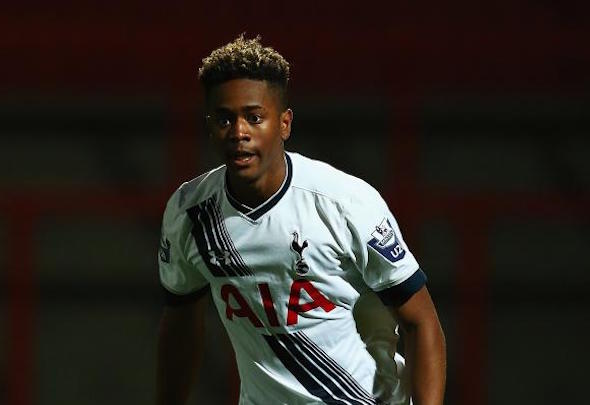 Mauricio Pochettino and his staff are confident the 18-year-old striker can follow in the footsteps of Harry Kane and company by making the step up from the Academy to the senior squad.

Harrison has trained with the first-team group at various stages this season but is yet to be named in a matchday squad for Pochettino’s side.

However, the young forward has served notice of his potential for Tottenham Under-21s, scoring six goals in 12 matches, including a hat-trick in Monday’s 3-1 win over Sunderland.

Spurs have earned a reputation for producing and developing some of the best young talents in England in recent seasons.

Pochettino has insisted in the past that there is plenty more talent in the age-group teams capable of breaking into the senior side in the future, namechecking Harrison and 17-year-old Kazaiah Sterling as players for whom he wanted to clear a pathway to the first team..

Speaking in February, the Argentine said: “We have younger players that train with us like Shayon and, in behind him, Sterling and different players. We have to believe in the younger players because for our future they will be very important players.”

Speaking after his Under-21 hat-trick against title-chasing Sunderland, Harrison told Spurs TV, “It’s amazing, I’m over the moon. It’s my first hat-trick for the under-21s so it’s a big positive for me and I’m just happy to help out the team and grab the three points.

“I just want to keep scoring goals, keep working hard, and hopefully next season it will be a much more positive season again.”