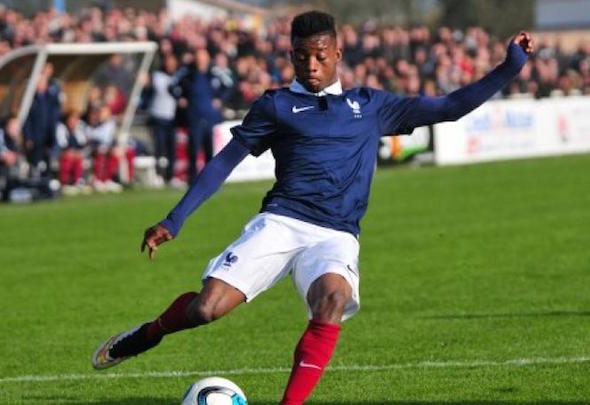 Tottenham have made a contract offer to teenage French striker Calvin Tshilumba, according to reports in France.

French broadcaster RMC Sport, citing the print edition of newspaper L’Equipe, claim that the Premier League giants have made a move to prise the striker from Laval in the French second tier.

It is said that Spurs have made a “proposal” of a deal to Tshilumba, who is a France Under-17 international and tipped as a rising star in his home country.

The 17-year-old only made his professional debut in Laval’s 3-1 French Cup defeat at Avranches last Friday but L’Equipe report Spurs are trying to snap up the teenager ahead of rival clubs.

The high flying London club are keen to sign Tshilumba for their development squad and give him time to learn his craft with the youth team.

Tshilumba, who has accumulated two France Under-17 caps as well as 14 caps for his country at Under-16s level, plays as a striker for club and country.

He played the last nine minutes of Laval’s cup clash last Friday after being introduced as a late substitute to win the game for Ligue 2 side.

Tottenham have only two senior strikers in their squad, with premier spearhead Harry Kane backed by struggling Dutchman Vincent Janssen.

Kane was rested on Sunday as Janssen led the line in Spurs’ 2-0 FA Cup win over Aston Villa although the AZ Alkmaar striker extended his run of failing to score in open play for the London club to 23 matches.

In other Tottenham transfer news, the club are close to sealing an attacking midfielder transfer.